This is an fitting follow-up to our photo essay on Toronto's abandoned bikes last week. The Neon Bike Project is one of those little DIY street art interventions that I tend to think make the city are far more interesting place. The work of Caroline Macfarlane, a staff member at the OCADU Student Gallery, the repainted bike is a rather literal example of "re-cycling," and we've seen photos of it popping up all over Flickr.

Here's the story. While outside cleaning the gallery windows one day, Macfarlane was struck by the fact that an old Raleigh bike that was locked in front of the gallery wasn't likely to ever be ridden again. "It occurred to me that the Raleigh had never been moved from that spot for as long as I could remember," she writes on her blog. "It was a permanent fixture on the street, a gorgeous skeleton of an antique bicycle long forgotten... I began to feel sorry for it, and that's when I decided that Vanessa and I should reclaim it. The student gallery is on a rather gray, dismal strip of Dundas St; it's all cement and no trees. We would plant some flowers in bike's basket, even better, we would also paint the frame of the bike, all of it and in NEON." 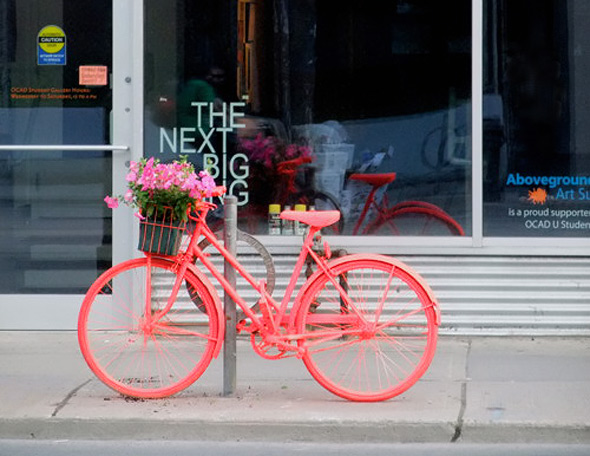 Cool idea. Trusting that the bike actually is abandoned â which by all rights it seems to be â why not brighten up the street a bit? Similar "installations" like the Kensington Market garden car and the more recent tree planter revitalization project have been successful at just such a task.

Here's where it gets silly, though. After having completed the beautification of the bike, Macfarlane arrived a couple days ago to find that it had issued one of the City's infamous abandoned bike removal notices. "The funny thing is that this bike has been sitting in the same place for years, unnoticed by the city," she explains. "However, once it is brightened and made beautiful, it's got to go." A face-palm worthy moment if there ever was one.

Given that the removal notice is dated May 30th and gives a one week grace period, that leaves five days for Macfarlane to save the bike. She's asking that people write to blogthegood@gmail.com with reasons why the neon bike should remain a part of the streetscape. Who knows? Maybe Rob Ford's love of the little guy can be leveraged here? 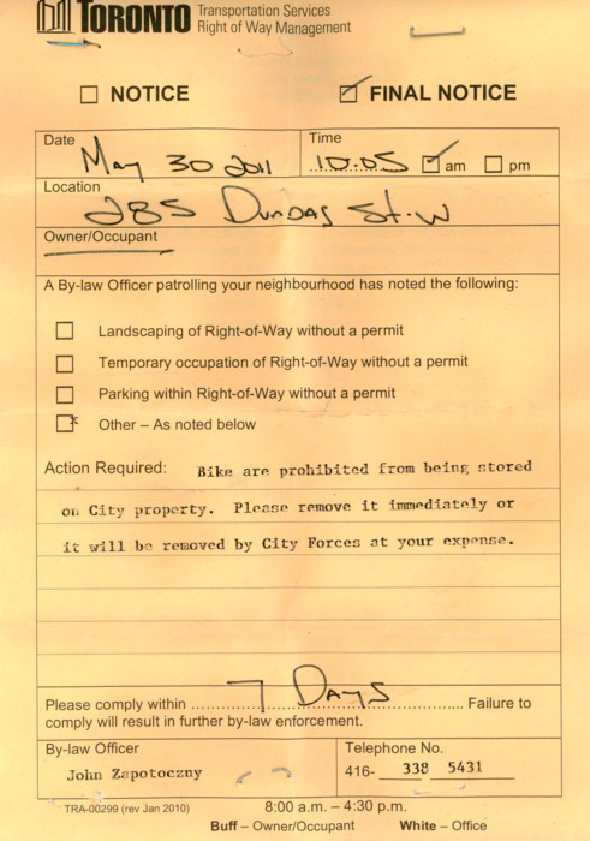