Tree planters serve as the seeds for street art

Sometimes street art is what a city needs. To beautify. To revitalize. Sometimes the broken windows theory is just about broken windows. Ideology. You know, that thing that says that any unauthorized intervention must be unreasoned or some sort of zealousness â misplaced desire.

Nice things do happen. Sometimes. You know, when Lego fills a crack not covered by some tax. When the city sort of heals itself, even if only when it comes to the band-aid-worthy wounds. Yeah, this is gushy stuff, but here's what I like about Toronto's latest guerrilla street art project: it's productive, fun, and, for the most part, unpretentious. 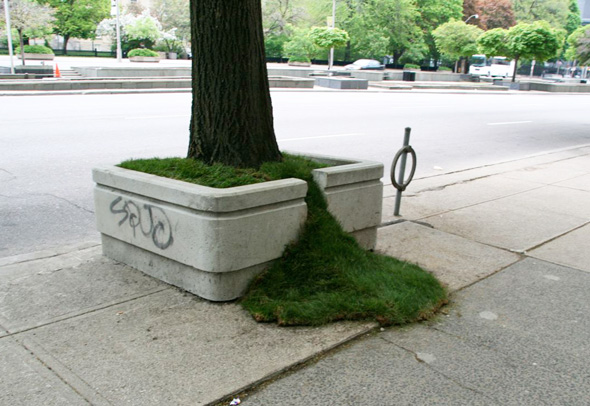 As of Monday morning, over 20 refurbished concrete street planters can be found throughout the city's west end (mostly around Queen and University and Bloor and Lansdowne), all of which take something putatively broken and make it better again. Here's how the curator of the project, Sean Martinadale, describes the work:

"The overarching project is called "Outside the Planter Boxes", and it's intended to highlight some of the neglected city tree planter boxes that line our busy streets by staging a number of creative interventions. These planters are generally made of concrete and many are cracked or missing large chunks (see images)... 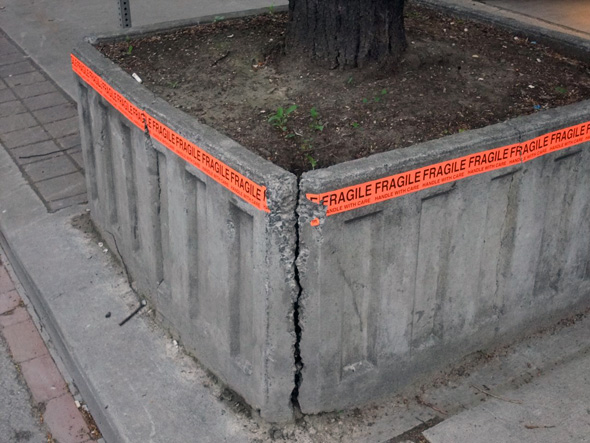 To be clear, this project is not about pointing fingers... We all have stakes in our shared environments, and this public project will directly engage with Toronto's urban fabric. One of the primary intents of this 'Outside the Planter Boxes' project is to encourage more direct participation and interest in our shared public spaces â to demonstrate that the public can play a more consciously active role in how our city is shaped..."

Martindale received Toronto FEAST Project Grant earlier this year, which allowed him to rally the dozen or so artists who participated in the project. And while it's a little tough to pick favourites, I have to say that Martin's Reis' Lego sculpture near Bloor and Lansdowne hit all the right notes for me. Somewhat reminiscent of Invader's mosaics, the artist told me by email that his main inspiration is the work of Jan Voorman, who's done similar Lego-style explosions in other cities. I'm also fond of the planter spilling over with sod and the simple "fragile" tape intervention.

Although the City of Toronto didn't authorize these projects in anyway, one suspects that they will challenge simple notions of vandalism. After all, you can say what you want about street art and public/private property, but these constructive interventions are the very stuff of engaged urbanism. 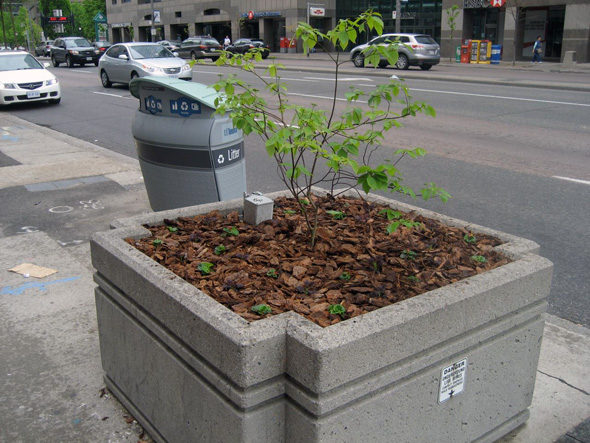 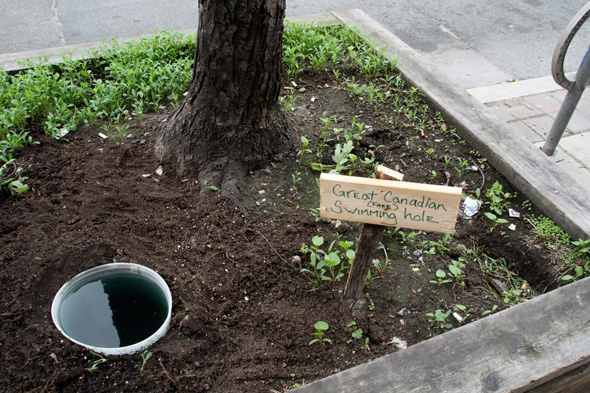 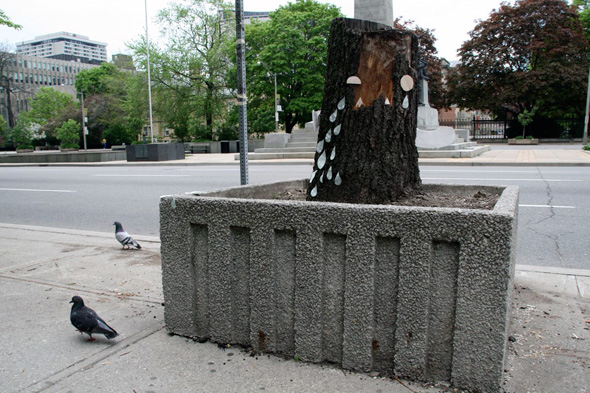 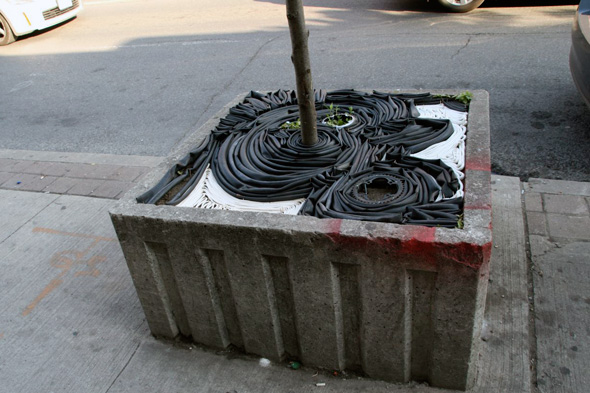 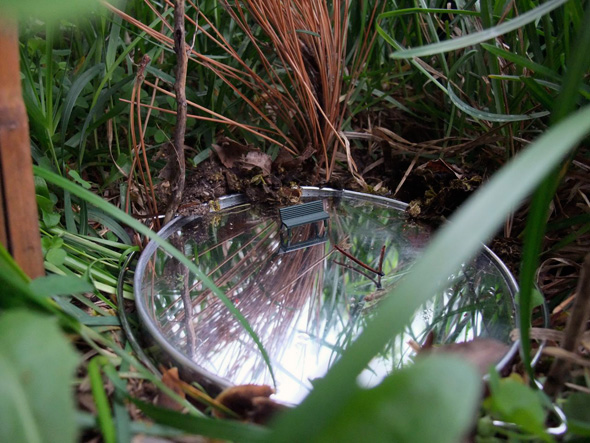 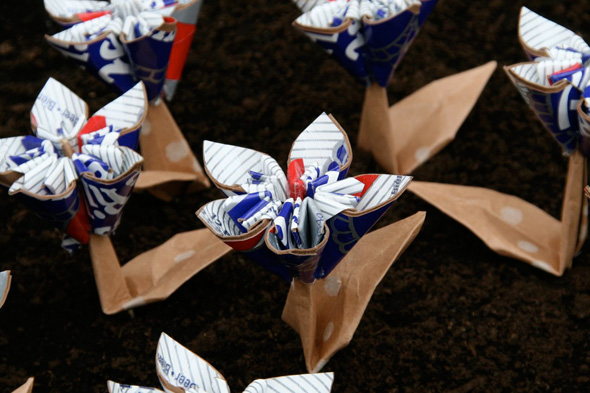 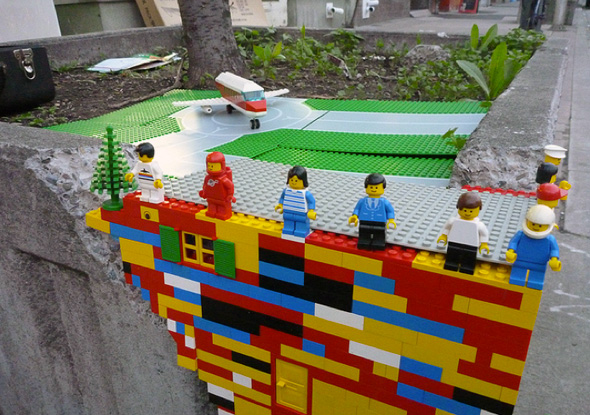 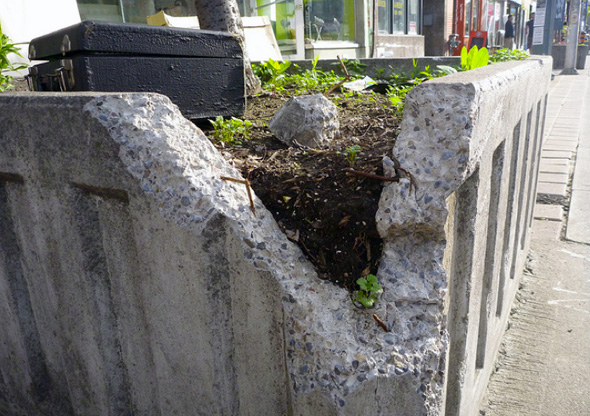 Photos supplied by Sean Martindale and Martin Reis. More info on each artist to come