I wouldn't normally dedicate a post to the unveiling of privately commissioned artwork, but I'll make an exception for the two enormous murals that Jose Parla showed off at CityPlace last night. Not only are these pieces stunning, but because they're located in the lobbies (yup, there's two of them) of the condo at 10 Capreol Court, it's also possible for anyone to go check them out in person. In fact, despite the at times sanitized aesthetic of the CityPlace development, the place is surprisingly rich in art projects. 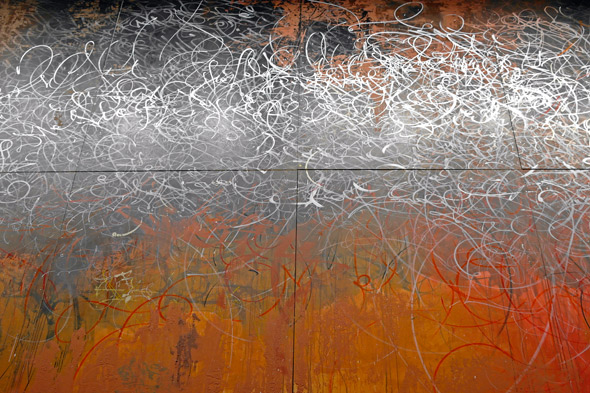 Along with Douglas Coupland's notorious red canoe and Mark di Suvero's "No Shoes," CityPlace also features work by John McEwen, Maha Mustafa, Francisco Gazitua and Pierre Poussin -- all of which have been sourced by public art consultant Karen Mills. As much as condos may be a homogenizing force in the city, with developers devoting percentages of their costs to art, some exciting stuff has popped up in lobbies throughout the city. Along with what's going on at CityPlace, Barbara Astman's glass installation at the Murano building on Bay Street is a good example of how far even a scant portion of a development's budget can go. 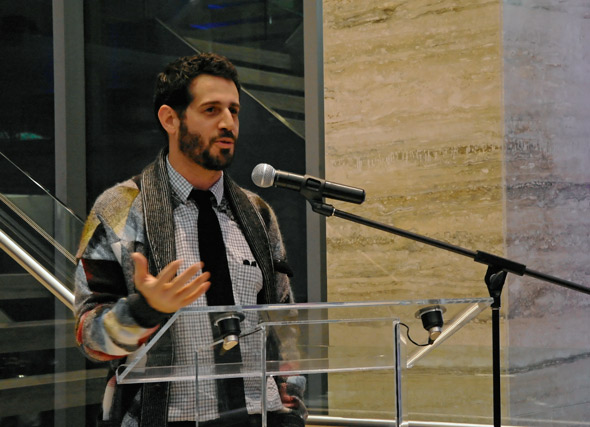 But Parla's work is noteworthy for more than just its location. Massive in scale and highly detailed, each of these two works -- "The Bridge" and "The Names that Live and Sometimes Fade while Time Flies" -- reveal an artist who's quickly building an international reputation. Snagged by CityPlace three years ago, the Brooklyn-based Parla has received lot's of attention for what he call's his "typewriter" method. 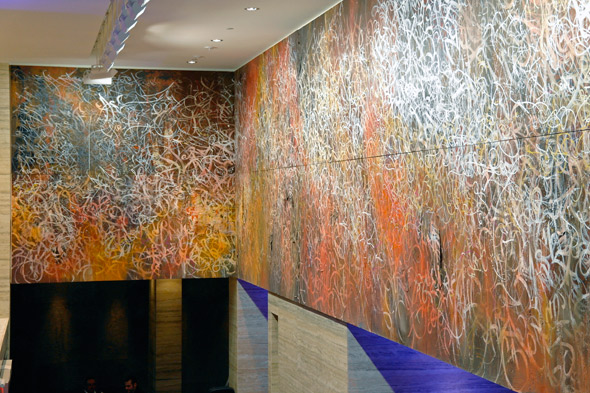 Speaking about "the Names...," which is the larger of the two works (both in size and length of title), he told the Globe and Mail "This piece was complex to execute because of its size, so I spent six months working on it, building up the surface the way I had envisioned it. The history of the layers building up like that is important to me. I don't think about it very much.... It's very automatic the way it happens, I know what I want it to be like from the start. So I begin to work from left to right like a human typewriter, and start again and again as I continue to paint and write from left to right until my list is done and all the colours and layers and textures come together."

The best description of Parla's pieces that I can give is that they're what you'd get if you mashed together the work of Jackson Pollock and the urban palimpsest that is a wall covered in graffiti. And that's a pretty cool combination, isn't it?