The TTC art of Sigmund Serafin

My discovery of these Sigmund Serafin renderings of prospective TTC stations is a pretty good example of the way that comment threads can add a whole other dimension to a given post. After sharing some architectural renderings of the original stations of the TTC's Yonge line that I'd found on the weekend, Steve Munro commented with a link to another set of works by the same artist. As it turns out, the story behind this second set is quite intriguing. Having saved these renderings from the garbage heap when the TTC planned to throw them out, Munro donated them to Transit Toronto and did a little digging into the background of the artist.

Now, I'm not going to steal the so-called thunder of the Transit Toronto post on this by recapitulating everything that's contained there (that's what hyperlinks are for), but I can't resist featuring a few of these watercolours. As much as I like the original black and white renderings held by the Toronto Archives, these colour paintings are really far more interesting, and the cross-sections are surprisingly illuminating when it comes to picturing how everything fits together underground.

The eight-image strong collection features renderings of stations on what are now the Bloor-Danforth Line and University side of the YUS Line. Despite the fact that the paintings were completed about 10 years prior to construction of both, it's surprisingly easy to identify a number of the stations.

I'll leave out the labels/identifications of the ones below so readers can offer their guesses, but for a look at all eight of images (in bigger sizes) and some useful descriptions, check out the original post on Transit Toronto. 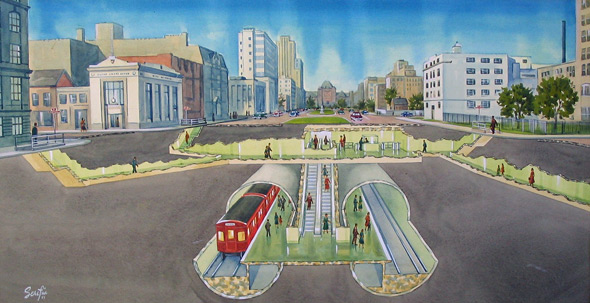 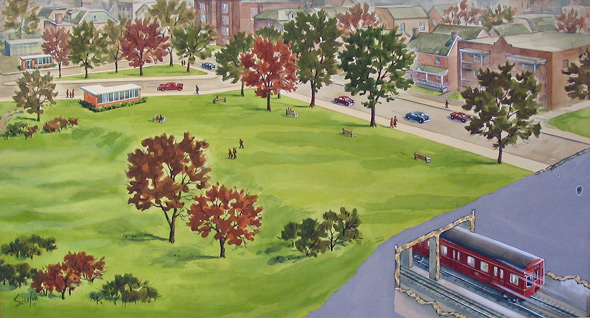