"In grade 13...I was in the lead role in The Princess and the Pea and Greasers," Rob Ford proudly told a packed crowd during his opening statements at Wednesday night's mayoral arts debate hosted by the AGO. "It was pretty funny to see a 300 pound football player in leotards and tights."

Ford's charm offensive fell on deaf ears, however, as he faced a hostile crowd throughout the evening. All candidates, except him, pledged to increase arts funding to $25 per capita by 2013.

"I'd love to be able to promise it, but we're three billion dollars in debt," Ford said. "I'd love to come out and say 'Yes' but I can't sit here and promise something that I can't say for sure is going to happen."

Ford suggested instead that city property be opened up as a venue for artists to display and sell their work, and private fundraising be the primary source for new arts investments. 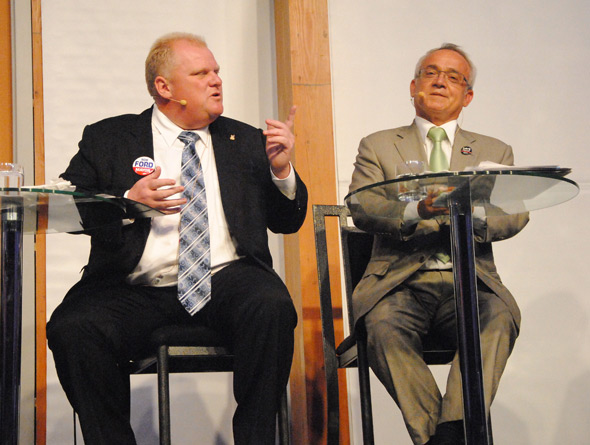 When questions from the audience were taken, Albert Schultz, artistic director of the Soulpepper Theatre Company, asked Ford directly: "What are the initiatives and programs you think will not only protect but support and enhance [the arts] industry?"

"We must get the private sector to donate money to make up for the shortfall that we can't get through the city budget," Ford responded. 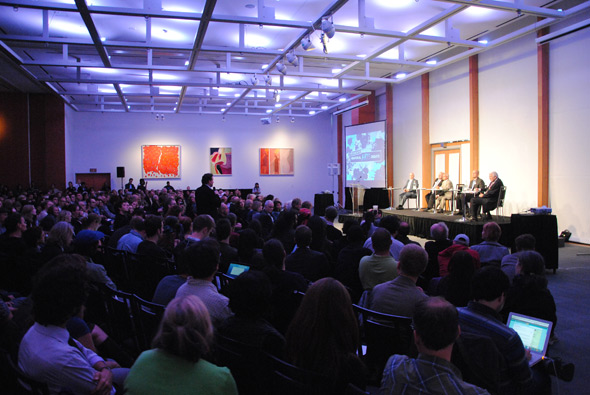 And then he made his most unpopular remarks. "Not everyone supports funding the arts," he told the obviously art-conscious crowd. "We're $300 million behind in road repairs. Don't you think it's more important to have safe streets and roads fixed before funding stuff we can't even afford?"

"You can have an arts dinner and have the private sector buy tickets and you can fundraise a ton of money. I've done it, trust me," Ford continued. The audience booed and hecklers started interrupting him.

But Ford shot back. "If we had the billion dollars that Mr. Smitherman squandered in his eHealth scandal, how many art programs would that fund?"

George Smitherman, however, countered by calling for a "touring fund" to allow artists to act as ambassadors for Toronto at international events and a mayor's gala to promote the arts. He also suggested an "arts and business breakfasts series," which could encourage more private sector investments.

Pantalone started by displaying a graph that showed Toronto's debt as low compared to other governments in Canada, making the point that Smitherman was exaggerating the extent of Toronto's financial problems. 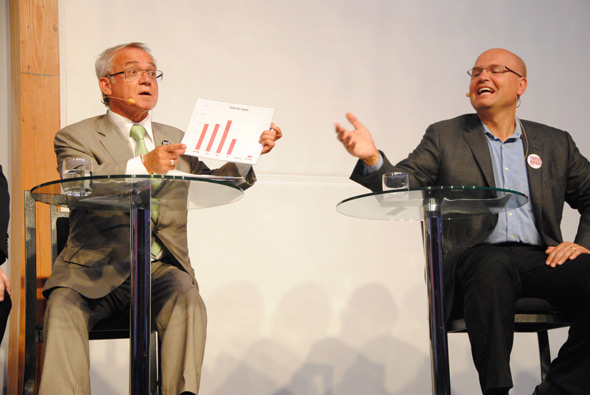 "When you made those promises to Manifesto about the implementation of the billboard tax, why didn't you fulfil them if you're all that?" Smitherman responded.

"Had the province of Ontario not been a deadbeat parent to Toronto..." Pantalone started.

"Now you're calling the city bankrupt. You just criticized me for doing that and now you're doing that," Smitherman said.

Later Pantalone warned the audience that Smitherman planned to cut arts and culture funding. And when he began to speak of his experience at city council he took another jab at Smitherman. Being mayor isn't a "consolation prize for not becoming premier of Ontario," he said. 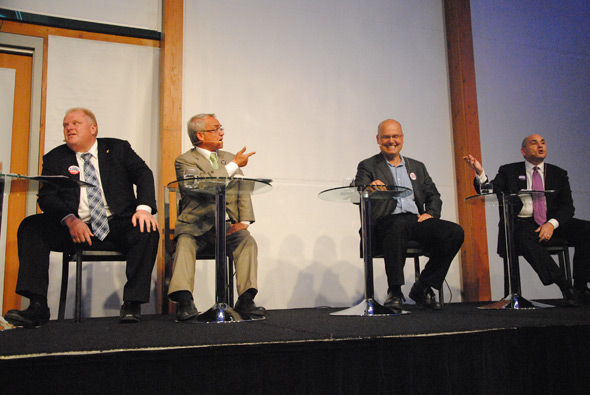 The debate also included James Di Fiore, a fringe candidate who "has no illusions of winning" but decided to run to help increase youth engagement in the political process. He was chosen as a participant by an online poll at the ArtsVote website. He works as a journalist and arts organizer.

Di Fiore spoke about the potential for profit in the arts and culture industry and about the benefits of corporate sponsorships for arts events in Toronto. "You can make money from the arts -- this seems so simplistic and easy for me to understand I don't understand why it's even debated as much as it is," he said.

Wednesday's debate was more lively than usual. Sarah Thomson's decision to drop out of the race, election day coming closer, and new poll numbers likely contributed to the candidates' energy. The enthusiastic crowd that filled the AGO auditorium to the brim -- so much so that organizers were denying even journalists entry at the last moments before the debate -- also enlivened the event.

There were no major surprises, except maybe Smitherman's announcement that he'll appear on So You Think You Can Dance Canada on election night, but the animated discussion was stimulating and clearly displayed the characters of the candidates, which is more than can be said for the majority of other debates I've taken in.