Flavio Trevisan makes some pretty fine maps. Just don't try to use them if you're looking for directions. Currently showing at Diaz Contemporary, Trevisan's map-sculptures of Toronto perplex as much as they delight. In fact, it'd be fair to say that what makes them so compelling is the degree to which they render the city as both iconic and unfamiliar at once.

I'm fascinated by cartography both new and old. Not surprisingly, then, I often find myself poring through the Historical Atlas of Toronto rather frequently. A wonderful book, it tracks the city's progression -- be it historically, economically or technologically -- via the various attempts made to map it. What's so rewarding about flipping its pages is the manner in which the maps reveal the complicated relationship between Toronto's past and present. Whenever I finish a pass through it, I tend to look at the city with a heightened level of perception. 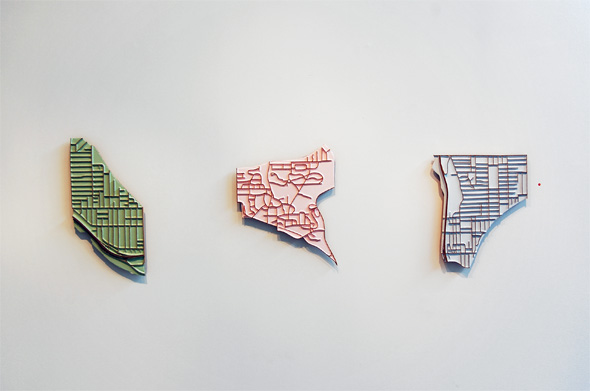 Trevisan's works have much the same effect. In the absence of their names, it takes far longer to locate certain streets and, in the case of the smaller maps, even whole areas become difficult to place. Particularly successful in this capacity is the small colour triptych, "Three Dales." In the wider context of the show, the viewer knows immediately that he's looking at cut-outs of Toronto neighbourhoods. But just as the streets have no names, there's no title beside the piece on the gallery wall. So the question becomes, which ones? I was able to pick out Rosedale (pink) in the gallery, but it wasn't until later that I realized the other two were Parkdale (green) and Riverdale (blue). 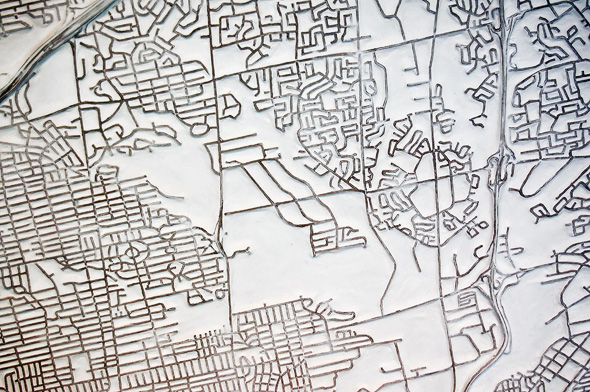 On the bigger maps, it's easier to pinpoint locales. But it's nevertheless remarkable to peer at the three-dimensional rendering of the streetscape. Not only was I struck by just how intricate the sculptures are, but I was reminded of the complexity of the subject matter itself (far more so than when I look at the Google map of the same area despite its greater detail). Fashioned from cardboard strips and drywall compound, the maps aren't necessarily pretty from up close, but this doesn't detract from the awe that they provoke.

Perhaps my favourite of the pieces is the other triptych titled "Up down, side to side, round and round." With the title it's not difficult to get a sense for what's being depicted. But, again, without the prompt, the pieces ride the line between the abstract and referential in such a way that the viewer is left with the feeling that you get when searching for a word that you've temporarily forgotten: you know what it is, you just can't quite express it. 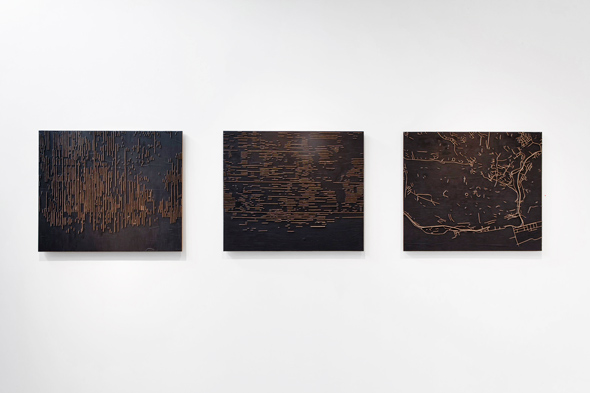 The difference is, of course, that once the word is remembered, the instance of forgetfulness is itself quickly forgotten. Taking in Trevisan's works has a more lasting effect. As I stepped out of the gallery, which is located at Niagara and Tecumseth, I kept thinking about the fact that the former of those two streets is curved because of the once present Garrsion Creek Ravine. The knowledge of this, for some reason, made me very happy.

Flavio Trevisan's Studies of a New Past runs until August 21. For more information, visit the gallery website.