There's something new and something old that's become new again in my latest edition of the Art Agenda. Sol LeWitt, a legend of conceptual art, returns to town to help celebrate the history of one of the city's galleries while a few younger artists reflect on life in the city and the effects of technology on our eyes. There are also several takes on identity, albeit in very different fashions and milieus, from twins to white trash. 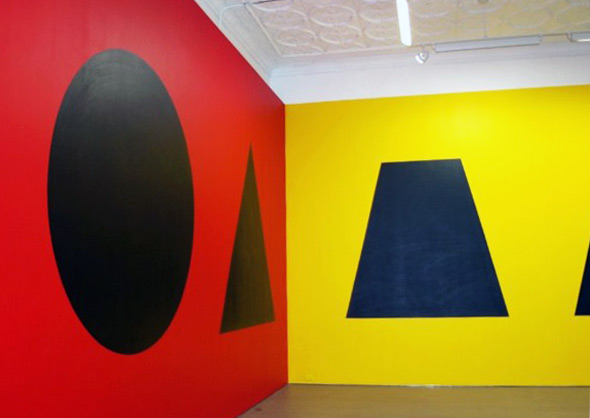 For something more art-historical, there is a unique chance being offered by the Mercer Union to see some works by renowned conceptual art pioneer Sol LeWitt. His monumental "drawings" fill the four walls of the larger gallery. In effect, they become brightly coloured pages which reflect back onto each other and the viewer enters them, interacts with them and shifts the geometrical relations with their presence. This kind of environment is added to by something which people don't often think of in connection to conceptual work - the tactility. There's a strong sense of touch and presence even if the scale of the work doesn't seem at first to invite such feelings.

In a dramatic shift in scale, the back room of the gallery presents a series of the art books LeWitt produced (lead image). They are splayed open in grids and set under glass around the room. There are numerous interesting things about engaging with the works this way. Their display is a game with geometry which allows shapes to keep folding into each other. It's a weird move, one which makes objects that were originally intended to be highly useful into artifacts. They become as symbolic and stripped of content as the shapes he uses. 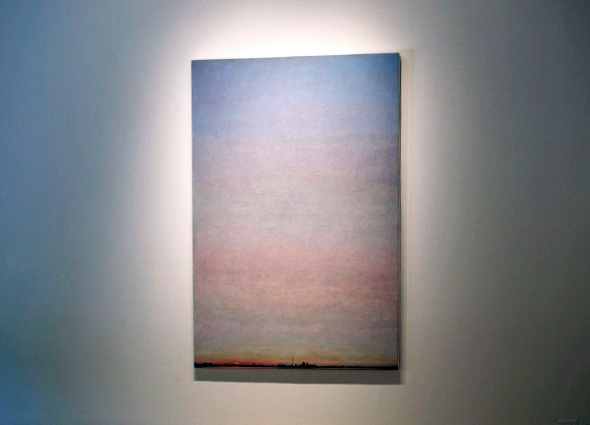 Over at the Christopher Cutts Gallery, I took a trip out of the city without actually leaving. Daisuke Takeya's painting are pillars of delicately overlapping and textured paint spanning almost the entirety of a horizon while a metropolis is depicted in flat, photo quality at the bottom. Even the sun is rendered as a clump of paint within the vastness. With the city marginalized at the base of the intense shifts in consistency and colour of the sky, there is a kind of vertigo created, but one which is tempered by the density of the paint. Its strong tactility provides the images with a curious grace. This last note is especially important given that the paintings have immense verticality, but never seem monumental. 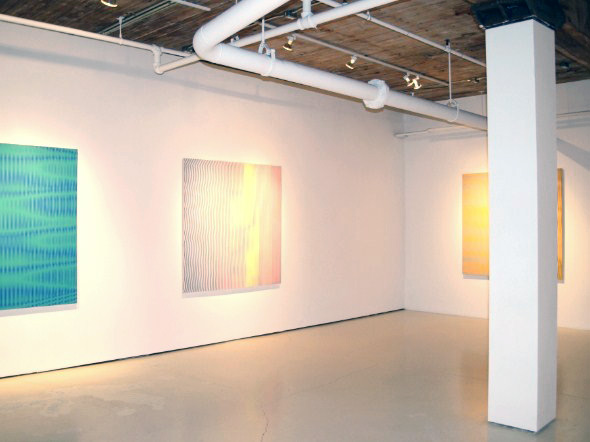 Visual games are also part of the new works by Curtis Amisich just next door at Peak Gallery. He creates a kind of Op Art which manages to feel fresh rather than retrograde thanks to a fine attunement to detail and nuance in a style of work which could otherwise become speedily tedious. His works walk a fine line between the recognizable and totally abstract.

They are recognizable because they are instantly reminiscent of everyday things like TV screens and computers, all of the visual noise which is generally ignored but omnipresent. But even when he plays on this in his titles, they aren't really images of these things. Instead, they are precise and densely composed patterns which weave together lines and colours. While that may sound minimalistic, the effect is anything but. They are loud images and they only get louder and more intense the longer that you look at them. Highly stimulating and hyper retinal, they succeed in being both intense and entirely vague at the same time. They're also quite funny if you read the titles. 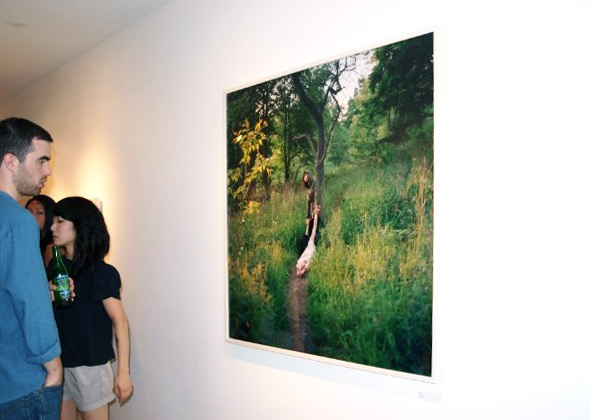 This is the second major collaboration by twin sisters, Hur and Kang and follows them as they dig into the various connotations of twinship with a new suite of photos at the Department. They do it in a way that's somehow both colloquial and somewhat esoteric. That said, there is nothing especially personal about the work. Instead, the well-organized exhibit seems to constantly reduce itself in scale, doubling back in a kind of involutionary pattern.

In "Funeral" one sister drags the other through the woods. A few feet away is a pile of dirt with layers of lace sticking out of it. This installation piece ties the entire exhibit together. The ball which hangs over the dirt is the one that one glance in a photo throws at another from across the room. One photograph literally stares across the gallery at another. They invert one another's poses and undergo rituals of identification. The dirt is from the grave of the double which almost inevitably appears either alone or in a state of kinetic confusion. The soft way they capture lines, the lack of sharpness or intense detail in most of the photos adds to the sense of blurring between subjects who seem as threatened by an engulfing negative space as by their own doubled nature. 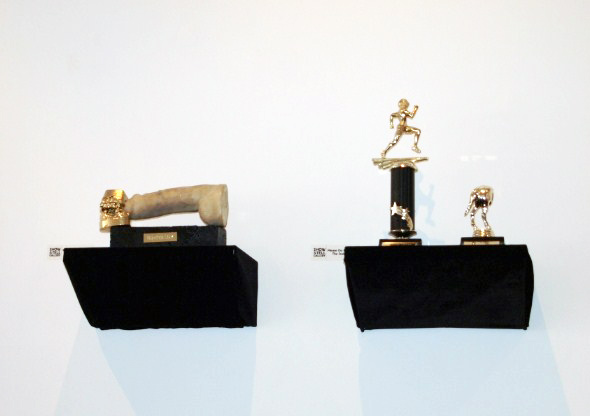 The Lister and McClelland exhibits at Show & Tell Gallery are joined by a shared enthusiasm for what may be dismissively called "adolescent behaviour." At least, it would be dismissive if it wasn't so overtly embraced. Anthony Lister, an Australian multimedia artist, has made a name for himself for embracing, or more specifically, appropriating, what could arguably be called the universal values of white trash culture. However, there's an enormous ambiguity in this embrace of the visceral and fantastical elements of the marginalized poor and white people of the globe. Its displayed in mocking form with a series of trophies and paintings of trophies. The awards are for things like getting drunk in public, worst costume, shitting etc. and feature various KKK members cast in an unusual combination of sometimes raw black painted wood and altered trophies. The paintings which accompany them are highly graphic and evocative of street art while they depict what may be various superheroes at some of their lowest points. 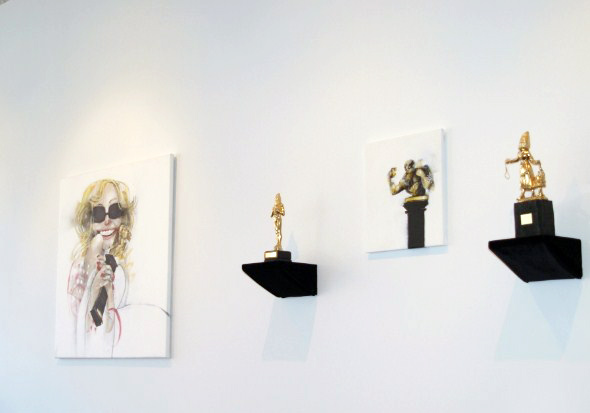 Niall McClelland's portion of the show is made of several imaginary covers for heavy metal albums and various ephemeral elements of stoner lifestyle. The content is less interesting than the method though, which pulls together an array of careful penciling styles to create densely textural work. As a a side note, similar, if less deflating, examination of the issues at hand can be seen just a few doors down at LE Gallery. Scott Waters' large drawings and paintings of guns with small, telling notes on them also takes on machismo, with a far more convincing degree of ambiguity and unsettling degree of craftsmanship.

If none of that is exciting to you, you can always check out the recent exhibits which opened at the AGO. "Drama & Desire" and "The Art of Victorian Photocollage" offer a languid peak into the nineteenth century. Across the street atBau-Xi, you can check out Joshua Jensen-Nagle's rather lovely landscape photos of BC and a new window installation has gone up by Icelandic artist Svava Thordis Juliusson at the Stantec Window Gallery on Wellington.