What happens when a streetcar becomes an art gallery?

Although not officially designated a public installation by CONTACT, Jordan Bower's transformation of TTC streetcar #4025 into a moving photo exhibit/art gallery might just be one of the most intriguing projects at the festival this year. Not only does it engage fully with the Marshall McLuhan-inspired theme of "pervasive influence," the narrative quality of the photos is perfectly suited to the captive -- and often boring -- environment that greets thousands of daily commuters.

I met Bower on his streetcar in the middle of a nasty rainstorm last Thursday. Having determined that it was running along College/Carlton that day, I was to board at Grace and interview the artist as we travelled westward. Small problem: because the exhibit is only on the #4025 car, you kinda have to be on time. 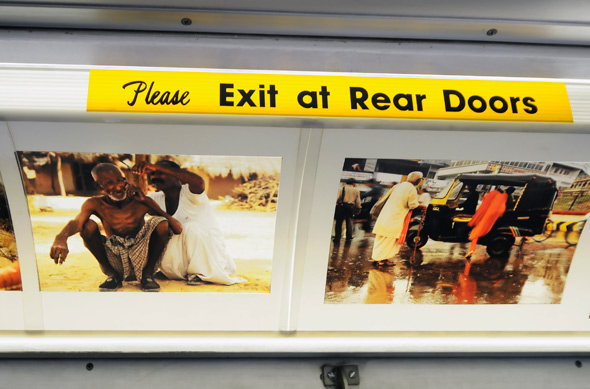 Shooting down from Christie and Dupont in my car, I missed our rendezvous by about 45 seconds. Thinking this wasn't too much of a problem, I assured Bower (by phone) that I'd chase down the streetcar, park and board somewhere down the road. This wasn't quite as easy as I would have thought. Fantasies of driving like Jason Bourne aside, making up time on a packed College Street in rush hour is not so fun (or feasible).

Stuck behind a roofing truck set on straddling both lanes at every intersection, I had to pull a plethora of dickhead moves to surpass the streetcar just before Lansdowne.

Fighting the rain -- and a little self-loathing for being late -- when I finally boarded, I learned that the car was turning around and heading east. Oh well, I thought -- at least our interview wouldn't be cut short on account of me jumping off to get to my car.

After introductions and a brief look at the exhibit, we sat at the back of the car and chatted about photography, advertising and the TTC. 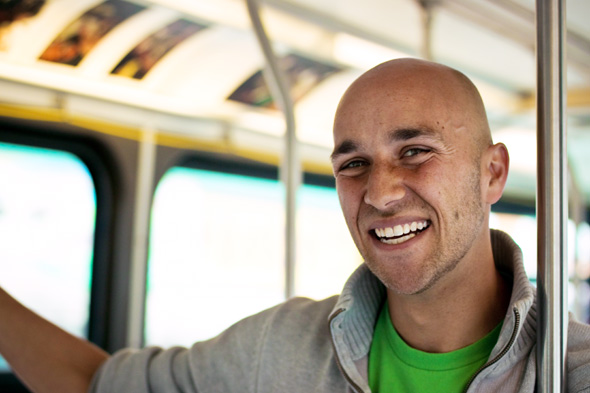 As earnest as they come, Bower's enthusiasm can be disarming. That said, had I seen this exhibit when I was in grad school, I probably would have mocked the inherent idealism that his photos seemingly reveal. This project does little more than shove pictures of brown people who are somehow, shockingly human down the throats of a putatively sympathetic audience, I surely would have surmised back in those oh-so-arrogant days.

But that's the thing, despite the documentary style of these photographs of India and Nepal, Bower isn't just drawing our attention to the obvious. Forgetting the heavy-handed title of the exhibit -- "What does it mean to be a human being?" -- this is more than the remaining evidence of a young man's earth-shatteringly important first trip to the East. 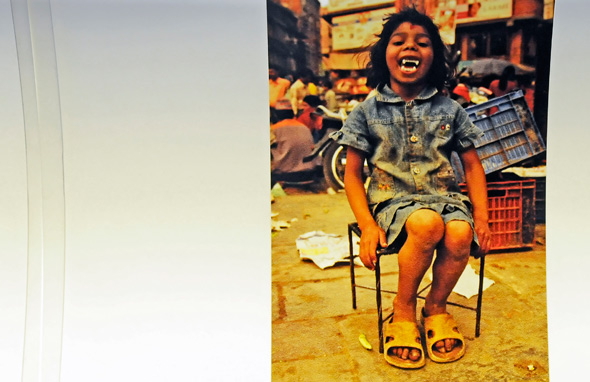 Bower's replacement of advertisements with fine art photographs deftly underscores not only how image-saturated our culture has become -- few riders notice the substitution of ads for fine art photographs -- but also the degree to which "the Other" is constructed via North American iconography. Are these Benetton ads? Are these people just like us?

It's easy to get caught up in the physical location of these photos, but that's not really a bad thing. I'm not sure if the original plan was to show these on a TTC streetcar, and I don't really care -- the fact is that the commandeering of a space normally reserved for selling things has now become a crucial element of Bower's project.

Instead of looking at a cliched version of life-elsewhere, riders on the #4025 are graced with a glimpse of images that are offered for no other reason than their very delectation. That this process might lead to a questioning of the relationship between East and West isn't so much beside the point, as it is a by-product of gazing at images that aren't, at the end of the day, selling something.

What, after all, do we do with images that lack an obvious purpose or goal? If Bower has his way, we think, we get uncomfortable and maybe, if they strike a chord, we even get a little inspired. 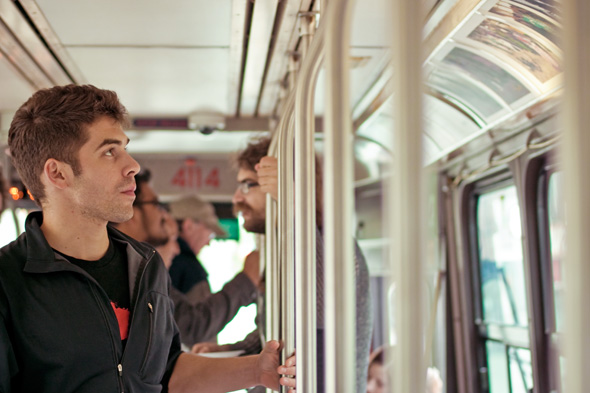 Still, when it comes down to it, and despite the fact that Bower's photos eschew text labels (or any other markings), it still remains possible to read them as advertisements. How so? Well, as some of the riders Bower's spoken to have confirmed, many just think that they're being exposed to some advance or mystery marketing campaign, the details of which will be known in due time.

Or sometimes people don't notice at all.

One of the (perhaps) disappointing observations made over the course of our trip on the #4025 is that riders don't take in the ads -- or, as the case may be, photographs -- quite as often as you might think.

I was surprised when Bower revealed that his ad-domination of a streetcar cost only $1,500 ($1000 for the space, $500 for printing), but if anecdotal evidence is to be trusted, less people than you'd think actually turn their eyes upward on streetcars. Somehow I doubt that this is merely the result of apathy. On the contrary, I'd speculate that this refusal is demonstrative of a disillusionment with the standard fare of images and ads, a prevailing disinterest in the predictable corporate offerings.

The everyday commuter is exposed to the same-old over and over again -- so why look up? Well, for the rest of May, Jordan Bower has given a reason, if only for those on the #4025.

For those interested in taking in the exhibit, which runs until the end of May, check out the twitter page, which features updates on the location of Bower's streetcar.

Photos one, two and four by the author. Photos three and five by Jen Tse.