As mid-February nears, my artistic engagement has slowly crept back up to full swing after a dreary January. And so too, it would seem, has the city's. Coming off a month in which a number of galleries took a break from new programming, there's been a flurry of activity of late.

A First look at the New Angell Gallery 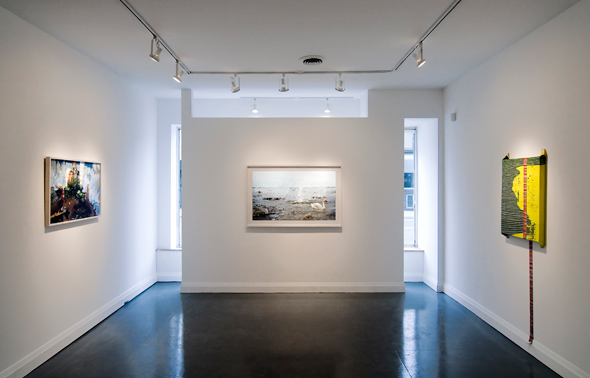 Along with taking in a number of shows over the last week, I stopped by the recently relocated (Feb. 1) Angell Gallery, which has taken up residence in the space formerly occupied by Lennox Contemporary at 12 Ossington St. I'll have a full profile of the new space in the coming days, but for now I thought I'd share an image of one of the new exhibition areas.

In the move from Queen and Crawford, Angell has gone from 750 to 4000 square feet of exhibition space. They've pretty much finished their renovations and will be presenting multiple exhibitions in the various rooms of the new gallery. Right now, the work on display provides a representative selection of artists on their roster, but coming up in April will be the first new shows and the official opening party. Stay tuned. 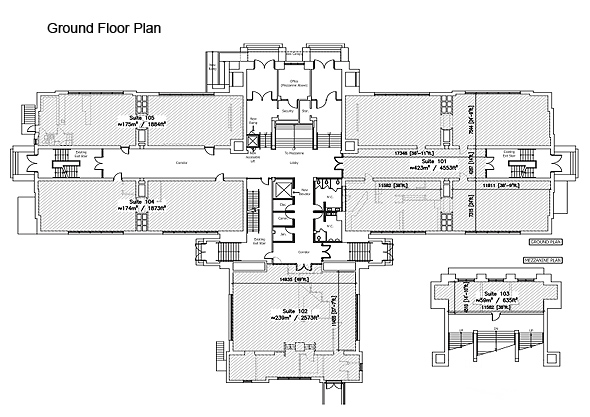 Also exciting is the recent announcement that Artscape has come to an agreement with the Toronto District School Board to re-purpose the Shaw Street School, located on the street for which it's named between Queen and Dundas.

The huge 70,000 square foot space is chock full of potential, and requests for expressions of interest can now be found online. Unlike the Wychwood Barns, the Shaw Street Centre will not include live/work spaces. It will, however, offer non-profit arts and community organizational space, artist studios, and a number of units will be offered for sale to artists on a below-market non-residential condominium ownership program.

The deadline for proposals is March 18 at 10:00 a.m., and there are a number of informational sessions two weeks prior to this date. If you've ever been jealous of those with affordable Artscape studios, now might be your chance to get your foot in the door. 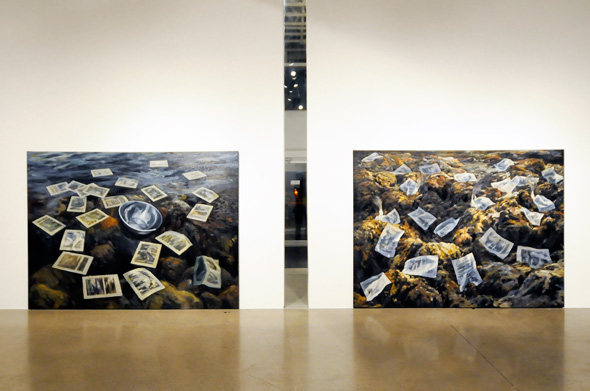 I've often wondered how Canadian (landscape) painting might "recover" from the Group of Seven. It seems that the majority of Canadian artists -- and in particular those at the outset of their careers -- aren't in the least bit interested in such subject matter. And it's not particularly difficult to understand why. The "anxiety of influence" is, of course alive and well -- and what better way to reject the stolid institutions of Canadian art then by turning one's back on its most celebrated form? 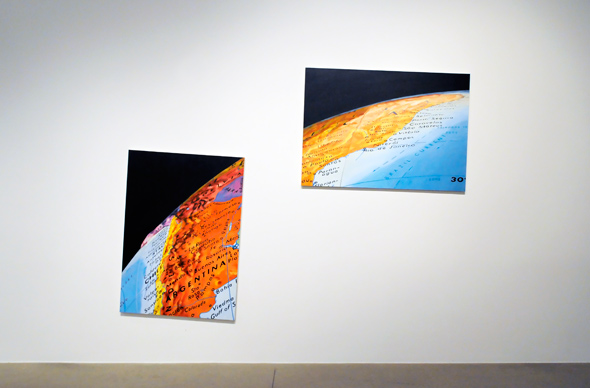 But then one comes across the work of Will Gorlitz. Anything but derivative, over the last 20 years Gorlitz has managed to carve a niche painting subject matter that is at once obviously Canadian and yet completely unique. As much as his series "Road Paintings," "Numerals," and "Not Everyone" speak to a sense of place, they also investigate the process of "seeing" that underwrites our topographical awareness in general.

Nowhere is that more deftly pulled off than in his "Numerals" series (see the left side of the photo below), which plays with the pristine depiction of nature by "inserting" numerals into scenes vaguely reminiscent (in subject matter, if not style) of Monet's "Waterlilies" paintings. The intervention is easy to miss if you're not paying attention, and yet the appearance of such artificiality speaks volumes about our expectations of paintings that depict such subject matter: "Oh, that was pretty -- next."

It's not until one slows down and dwells for a while that Gorlitz's work comes into "focus." 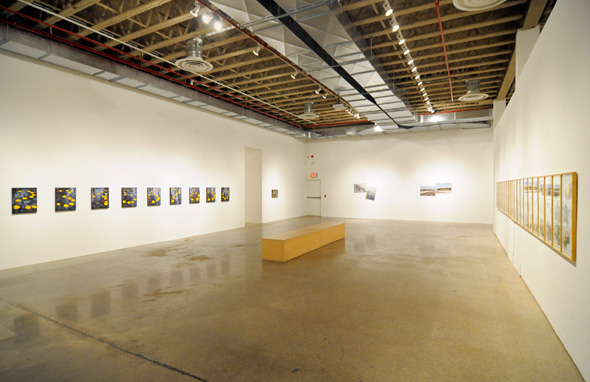 Building Storeys at the Gladstone -- Feb 4-27 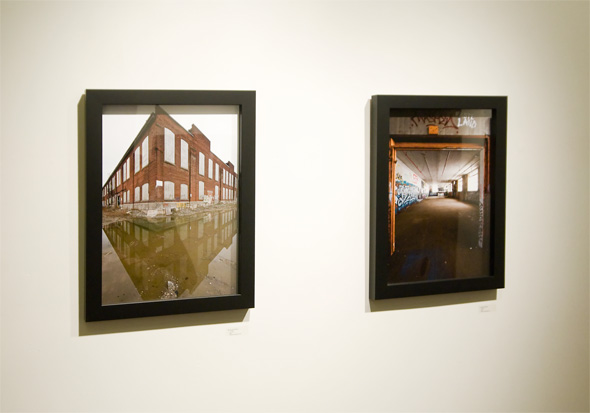 If, like me, you enjoy the excellent photographs of abandonments featured in blogTO writer Jonathan Castellino's work, then "Building Storeys" will be right up your alley. A collaborative effort between Heritage Toronto, the Shadow Collective and DK Photo Group, the exhibit offers a glimpse into Toronto's Industrial past. 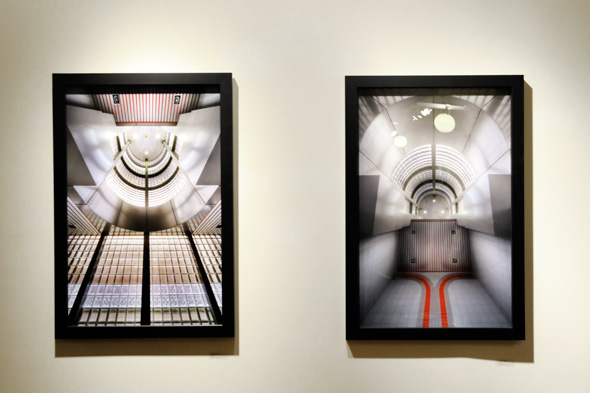 Spanning the third and fourth floors at the Gladstone, there's certainly a lot to take in. It's interesting to note the often significant differences between the styles of each photographer. I tend to favour those who are more technically precise, offering crisp prints of spaces that I so often wonder about. Towards this end, I was particularly taken by the work of Timothy Neesam (seen immediately above), His prints of the interior of the Ashbridges Bay Treatment Plant do an excellent job of capturing the Kubrick-esque aesthetic of this odd but visually compelling building.

I was less impressed by some of the other work that seemed to reveal photographers content with merely presenting images of hard-to-enter places. Although still interesting, such photos always leave me wanting more. It's not enough to get in and snap away. Attention to composition, noise, and what the image might communicate remains paramount. But, minor criticism aside, as a whole this is great show for Toronto-lovers and history buffs, or anyone else who's interested in the industrial aesthetic. 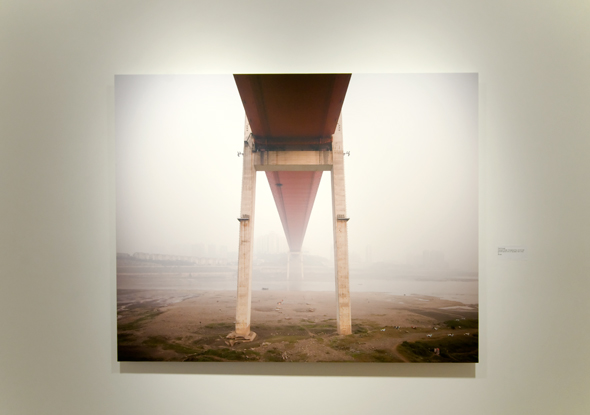 It'd be near to impossible for me to decide which of the next two exhibits I like more. But, I suppose I don't have to. Suffice it to say, these are my two favourites of a still young 2010. When I stopped by Bau-Xi to write a profile of the space, I was immediately struck by the beauty, precision and size of the prints in Ferit Kuyas's "City of Ambition." Sometimes a quick glance can confirm how technically accomplished a photographer is, and that's certainly the case here.

As much as I was impressed by the aesthetic qualities of Kuyas's photographs -- I actually purchased his book despite being pretty broke at the time -- a flicker of doubt about the subject matter did, however, start to linger after I left the gallery. More photographs of China, I began to think -- isn't this all a little repetitive, or worse, derivative? 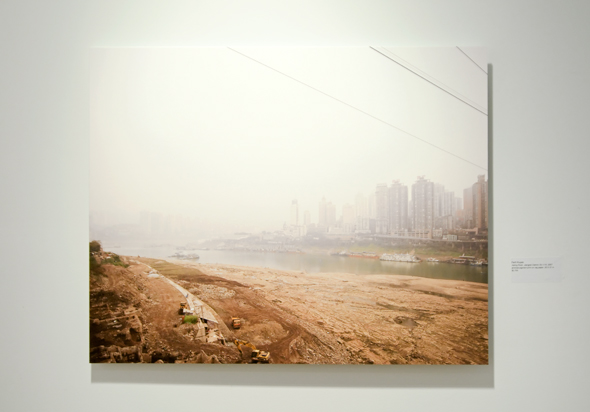 Sure, well-known photographers like Edward Burtynsky and Sze Tsung Leong have completed projects that document the changing nature of China and its cities, but upon closer examination, Kuyas's work is considerably different from these artists. First and foremost, he is quite a bite more specific about the topography he seeks to document. Rather than another attempt to demonstrate the growing density of China in general, Kuyas spent years photographing just one place.

All of the photographs were taken around the outskirts Chongqing, a city of 32 million located on the Yangtze River around 750 kilometres upstream of the Three Gorges Dam. Often referred to as the "City of Mist," Kuyas's washed-out photos capture both the literal and metaphoric interstices of an environment undergoing profound transformation. Just as mist in Kuyas's photographs is part natural phenomenon and part pollution, these spaces of absence capture the conundrum that accompanies the rapid rise of cities: the incessant march of progress tends to obscure our connection with the past, leaving us in what might be called the void of the present.

Both geographical and historical, then, the ubiquity of the haze that marks Kuyas's documentation of Chongqing ultimately gestures to our inability to comprehend fully the nature of this putative movement forward. And given his interest in the periphery of the city, Kuays's photos are very much about the mystery that surrounds the force of change and our invariably delayed understanding of its impact. 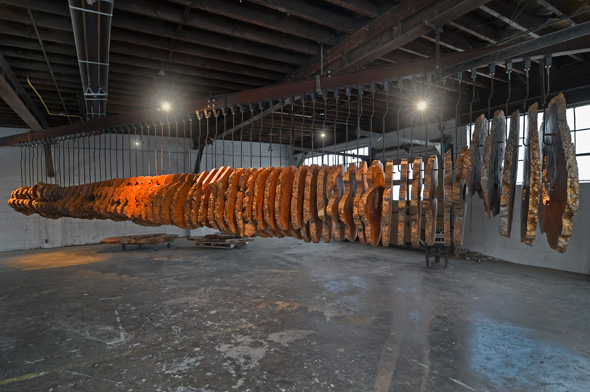 In his first solo exhibition at 47, the warehouse-style installation space near Queen and Dufferin, Dennis Lin reveals the beauty and complexity of the ubiquitous building material that is maple. Hung in 60 (cross) sections, Lin's formerly termite-infested tree immediately recalls the aesthetic of a fossil. In fact, the now horizontally oriented object could easily be mistaken for an enormous dinosaur tail. 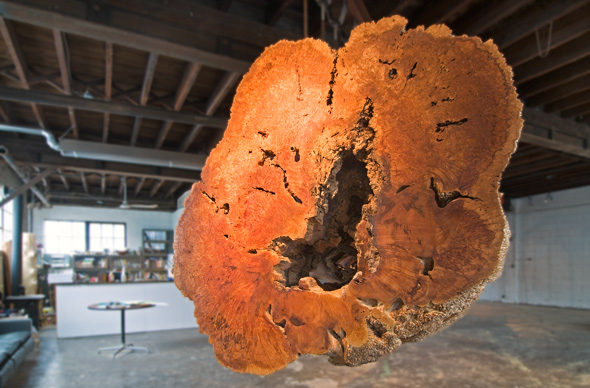 Presented this way, "no. 1-60" has multiple registers. On the one hand, it hints at an ominous future in which the tree has also gone extinct, relegated, as it were, to the tomb of the museum, where visitors can marvel at its majestic nature while lamenting its loss. But, before getting too carried away on this tangent, these "green" underpinnings are not, to my mind, the main focus. 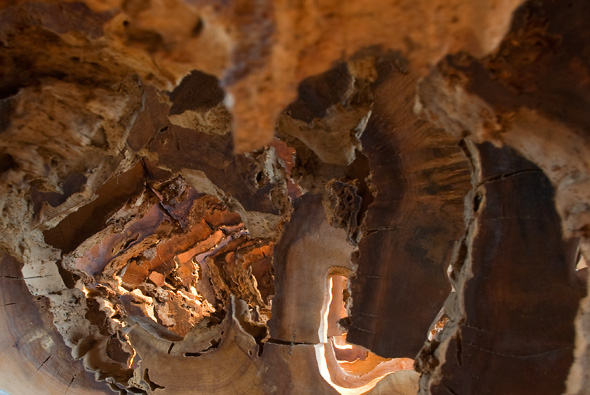 This installation is primarily concerned with defamiliarizing and celebrating the natural object as that which is always already a work of art. Although the artistic object is, by its very definition supposed to be different than nature (going back to the Greek opposition between phusis and techne), what Lin's "no. 1-60" suggests is that a certain way of seeing reveals even apparently natural and untouched objects to be artistic.

In other words, the production of art need not be attributed solely to the maker. As the Russian theorist, Viktor Shklovsky argued, "art is technique" -- a definition which surely encompasses both creator and "spectator." If art is a way of seeing, then the perceptive and engaged individual has licence to "create" via the process of interpretation and viewership.

So, hanging a tree in the middle of gallery may seem blunt, but it is in fact a subtle gesture to the dialectic process through which we fashion and experience the artistic product. 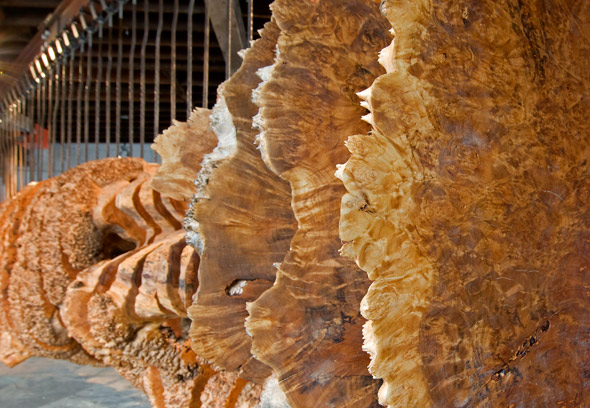 Confessions of Love -- Daisuke Takeya & Tad Hozumi
In certain Japanese pop culture, telling someone you love them is known as a 'kokuhaku' or a confession. In this timely exhibit -- it is just about Valentine's Day, after all -- Daisuke Takeya and Tad Hozumi explore the multiple registers of love and communication in a series of multimedia works.
XPACE Cultural Centre, Feb. 12 - March 13 (Opening tonight 7-10 p.m.)