Late last year, the city very quietly changed their livewithculture.ca website from a catalogue of listings to a blog, although they've only just gotten around to publicizing the change recently. It's a refreshing surprise for anyone - which would mean almost everyone - who was unaware that the city's branded cultural promotion initiative went much beyond street banners downtown and a few subway ads.

Christopher Jones is the principal voice of the renovated site - he has the title of Cultural Affairs Officer (Acting) and has written the majority of the site's posts, which have, at least since the new year began, profiles of the owner of Soundscapes and an artist who collects family photos and films, as well as features on a dance company, Elvis Mondays, and family day at the Gardiner Museum. He admits that the blog looks like a one-man band, though he says he's excited about receiving new posts this week from other workers at the city's cultural affairs department, and is actively looking for artists and arts organization employees to contribute.

"I would love to have people who are on the inside of the culture sector," Jones says, "so they could reveal the inner workings of culture in Toronto. I want people with a point of view - I think a lot of arts journalism suffers a little bit because writers are hemmed in by the format of the vehicle for which they're working. What I love about blogging is that you get more of the voice of the writer, and I think that can really add to the content."

Livewithculture is very much a part of David Miller's mayoral legacy - a city initiative to increase the profile of the arts that lost steam as the banner campaign got less fresh and traffic to the listings-based website had dropped by half. Jones said that despite this, the site still ended up with a high Google ranking whenever he did searches for artists, which led to the blogging brainstorm - a blog veteran himself, Jones got approval for the revamp, after which it took just two months to build the redesigned site, which went live in September.

According to Alexa, livewithculture.ca gets

, and page views have actually been declining since the revamp.
Here's what its traffic looks like compared to blogTO and Torontoist:The city's role in online publishing got a bit of friction this week with the launch of Yonge Street, Spacing veteran Shawn Micaleff's web magazine, which attracted criticism from city councilors only just informed of the city's financial sponsorship of the site. Ward 34 councilor Denzil Minnan-Wong in particular wondered why tax money should have gone to help pay a third party to cover city stories, telling the National Post that a press release should suffice - "Communicate that way and that costs nothing." 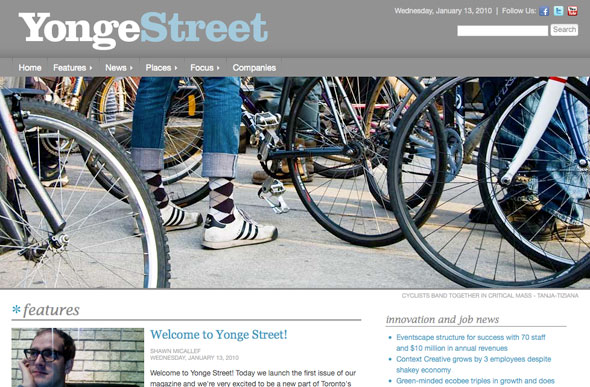 It's an evergreen issue in Canada, and it informs criticism of everything from the CBC to the very existence of the CRTC - why government should compete with private industry, never mind have such a heavy hand in its regulation. With two city blogs already covering arts, news and culture, there's no shortage of arts coverage online, and while livingwithculture.ca can certainly carve out a space for itself, it won't be with posts about Soundscapes, for instance.

Jones is quick to insist that council voted to approve funding for the livewithculture.ca site, and adds that he has no budget to pay outside contributors, and that the only expense in producing the blog is the labour by city employees like himself. "We hoped that this would be a little bit innovative. Around here we really subscribe to the whole idea of the creative city, so we thought this would be a great way to morph something we already had."

There is, of course, an inherent danger in soliciting contributions from artists and arts workers: creative people don't - and shouldn't - choose their words too carefully, and while controversy would probably attract the page views and buzz Jones would love to see, it would also attract attention, much of it unwelcome, from elsewhere in the city bureaucracy, not to mention its critics. To that end, Jones says that while he's eager to find artists who can write, he isn't looking for a fight.

"The goal of the blog is certainly not to be controversial - it is to elucidate and illuminate the arts sector. I would have a conversation with potential bloggers about the piece they want to bring forward, and if it becomes clear that they have a point of view or an axe to grind then we probably would take a pass on it. Controversy's not what we're looking for, though it doesn't mean it has to be boring or static."