Comedy for the Ride to Conquer Cancer

When I think of charity event fundraising, I'm reminded of those generic e-mails I receive from my friends as they sign-up for events and proceed to spam their contact lists looking for donations. With that in mind, I was pretty impressed when I a friend told me about Eamonn O'Connell and Dilan Dissanayake's fundraising efforts.

These two determined riders organized Stand Up for the Cure - a stand up comedy night at Clinton's to help garner sponsorship for their Ride to Conquer Cancer. Both riders will be attempting to complete the new 200 mile route (not to be confused with the existing 200km one) taking them from Toronto to Niagara Falls, all the while raising funds for the Campbell Family Institute at the Princess Margaret Hospital.

As an avid cyclist, this event really caught my eye - bicycles and humour? How can you go wrong? Having arrived at Clinton's a little early, I chatted with some of the comedians. I quickly found out that most comedians were from the Comedy Performance program at Humber, many having performed together at similar events in the past.

As I spoke to comedian Morgan Joy before the show she explained that events like these are really great for comedy students like her as they give her a chance to gain experience and exposure all while helping a good cause. With almost a dozen volunteer comedians waiting to flex their comedic muscles - I knew the audience was going to be in for a treat. 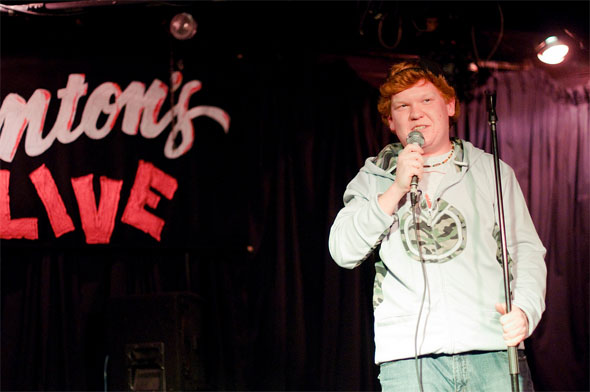 Once the night got going I really couldn't keep my laughter in check. There was really something refreshing about these comedians - their fresh and youthful outlook on life was a nice change from the regular comedy club routine and was very well received by the audience. To me, it seemed that as the night wore on the comedians got more comfortable with both the space and the audience, making for some really good comedy.

And now, I can't help but feel a tinge of guilt as I think of my bike, sitting in the basement gathering dust for the winter months. In the dead of Toronto winter, Eamonn and Dilan are just starting to ramp up their bike training in the hopes of being in full form for the ride on June 12th-13th.

I wish both riders luck and hope they surpass their fundraising goals. I asked both riders if they had any other similar charity events planned and they hope to host a silent auction as well as a board game night. To join in the fun, you can visit Eamonn's fundraising pages where he will be keeping everyone updated with training progress and future events.