Toronto Powers Up at Gamercamp

The inaugural celebration of Toronto's gaming community featured speakers, demos, and even an arcade outfitted with the best retro games you can remember (plus the games you can't). The brightest of the city's indie devs came out to play, and play they did. (Devs is short for developers, n00b.) 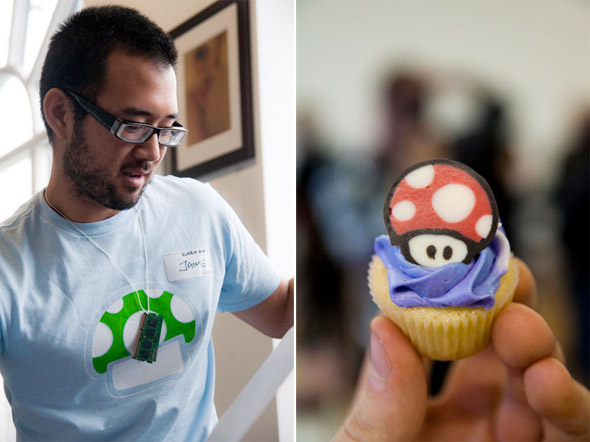 I donned a name tag that along with my handle, proclaimed my favourite video game. ( 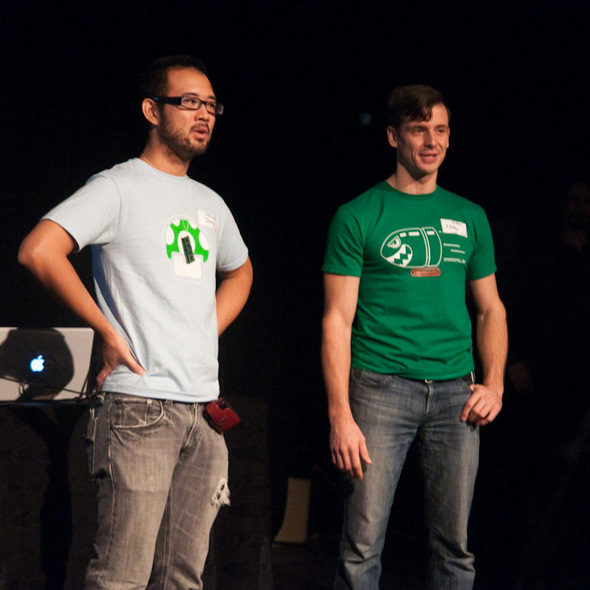 Gamercamp is the brainchild of Mark Rabo and Jaime Woo. I chatted with Jaime, a self-professed gaming nerd, about how Gamercamp got its start. (Fun Fact: his favourite video game is Final Fantasy VI).

"Toronto has a great independent gaming community, but it's intimidating to the casual gamer." According to Jaime, there are many events in the city that focus on the business or technical side of gaming and "we wanted to explore the artistry of gaming with Gamercamp." 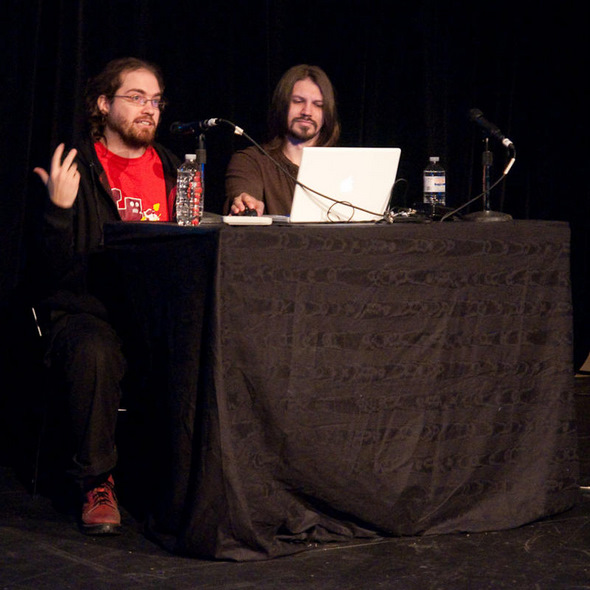 Unfortunately, I missed what I was told was a cool demo of a game called Guerilla Gardening by Miguel Sternberg and Andrew Pilkiw of Spooky Squid. Based on the street art movement, it seems exactly as it sounds. Playing as Molly Greenthumb, you must save the city after General Bauhaus, the city's fascist dictator, destroys all the green space. Molly's weapon of choice? Plants. 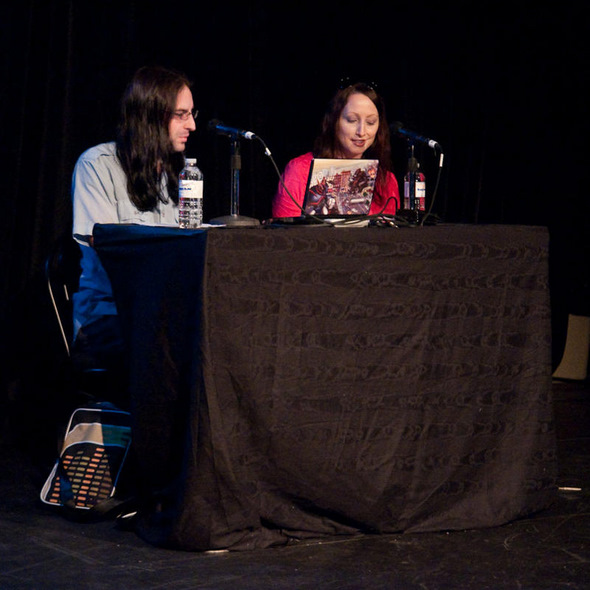 I walked in on Mare Sheppard and Raigan Burns giving a talk about how to use the "rock band" approach to making video games. The two own Metanet Software Inc., an indie game dev company founded in 2001. 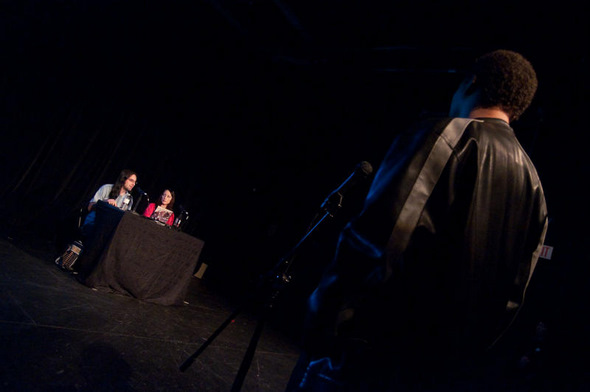 Fun fact: a doctor actually used one of their games in a study on ADHD and anger management. Patients played purposefully frustrating games to learn how to control their emotions. Gaining control of my emotions would've come in handy, especially when my mom cancelled my World of Warcraft account.

Up next, two reps showed off the latest prototype from indie game dev Drinkbox Studios. In development since around January of 2009, About a Blob is a 2D side-scroller where you play as a colourful blob-like creature that eats everything in its path and grows to massive proportions.

The audience laughed as we watched a rep use the adorable blob to mercilessly consume a cow. 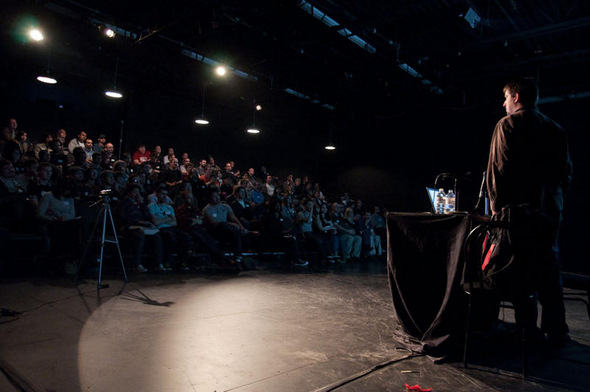 Michael Todd hit the stage to talk about his "game-a-week" development. That's right. This developer's thing was making games in the span of seven days. The benefits: rapid design, rapid feedback, rapid improvement.

Following a break, Daniel Steger showed us Battle Beat, a genre-mixing rhythm-based strategy defense game. And it was freakin' COOL. Kind of like the bastard child of Rock Band and tower defense games, where the player uses guitars or drums to fight back an incoming alien attacks. As Steger noted, there is a lot of untapped potential in musical games.

Nathan Vella, co-founder of Capybara, gave some great advice for indie studios. The Toronto-based company, which started out creating cellphone games, recently created the self-published PlayStation Network title Critter Crunch. Vella talked about the benefits of small teams, emphasizing the important of having a positive culture about mutual appreciation rather then a waterfall hierarchy. 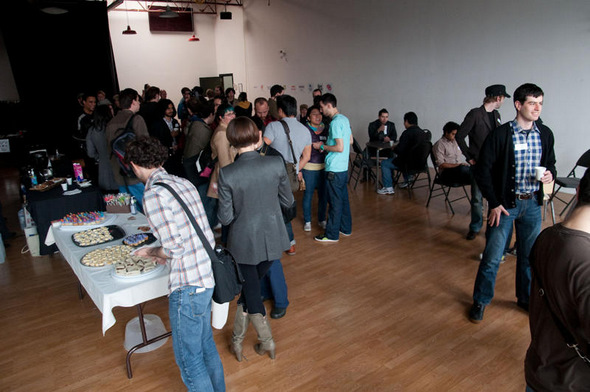 And on that note, it's great that Toronto is beginning to embrace it's indie dev community. Events like Gamercamp bring awareness to the awesome talent that is in the city and establish us a game development hub along the lines of Montreal and Vancouver.

The demos ended with animated pixel art by Craig Adams of Superbrothers. These unique shorts, set to music by Jim Guthrie, were bleeping awesome. See for yourself. 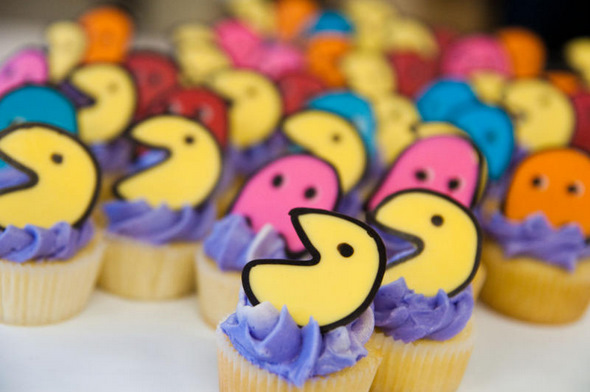 Gamers powered up on snacks that were as delicious as they looked. (If anyone can tell me who made these, I'd appreciate it. These cupcakes were courtesy of Sweetmeat.)

At the end of the evening, everyone headed downstairs for the 1UP afterparty, where 25 super rare and classic arcade games, provided by Replay Arcade Museum (Canada's first gaming museum, set to open soon), were set up for some freeplay madness.

For all of you gamers and game devs, the elusively-named Hand Eye Society (makers of the Torontotron, a glorious retro arcade cabinet fitted with ridiculously fun indie games) is holding a meeting November 26 at the Unit. Check it out!