Graffiti. Break dancing. MCing. DJing. These are a few of my favourite things. And with one epic summer-ending extravaganza, the third annual Manifesto festival blended them all. Over 100 artists and a full-day stage concert, embodying the true pillars of hip hop culture, transformed Nathan Phillips Square into a bonafide artistic playground. Best part of all? It was free. 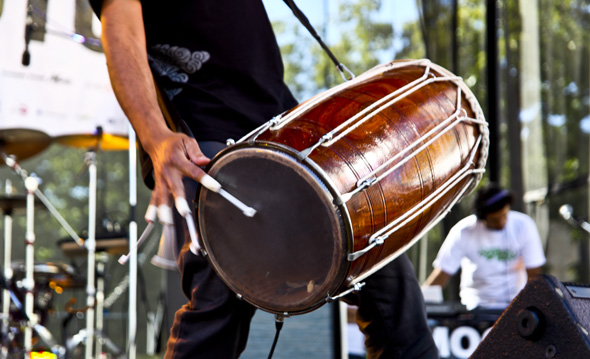 As I approached Nathan Phillips Square, I was bombarded right away with the pounding sounds of a djembe drum circle. Drummers, led by world-renowned Mohamed Diaby, hopped in and out as they pleased, while a handful of audacious older women tossed their shoes off and began to dance. Barefoot ladies wildly shimmy shaking to an energetic drumbeat...in public? Surely, a good sign. 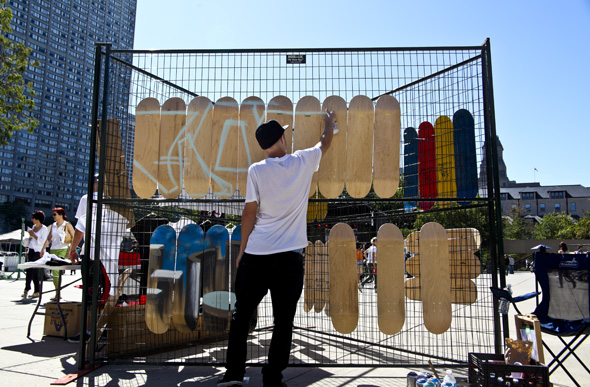 Past the pulsing drum circle, representatives from the Baitshop, a Toronto-based design and screen-print studio founded in 2007, were teaching spectators and aspiring designers how to get graphic with a gigantic screen-printing machine. 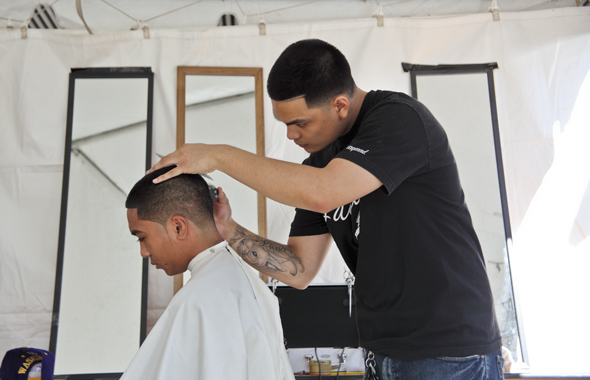 The next tent made me do a double take... Why? Because it was less of a tent and more of a barbershop. No joke. The mirror-lined makeshift shop was buzzing with guys and girls (mostly guys) looking to get, um, buzzed. A set of eight year old twins were lucky enough to convince their mom that getting Superman and Batman logos shaved into the backs of their heads was a good idea. Mad One, Toronto's notorious go-to barber/b-boy/graffiti artist extraordinaire, was on deck offering his services. 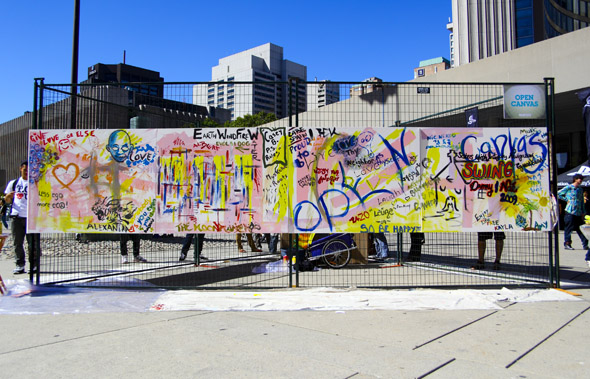 Things got even more creative further in, where a 70 foot graffiti mural was being graced by the artistic stylings of the city's best street artists. I turned to my left to see Art Child and Peru methodically spray-painting away side by side, then turned to my right to admire the artwork of EGR and Omen, among other graf artists. For those who were more do'ers then see'ers, an open canvas project lay at the centre of the square, waiting to be painted on. And it was. The artistic energy was infectious; graffiti-tagging grandmas, hipper-then-thou teenagers, and colour-happy little kids donned masks and spray-painted to their hearts content. 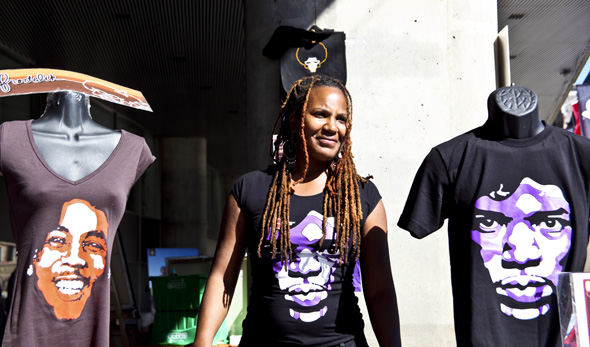 The Freshest Goods Market, a colourful collection of booths carrying clothing, jewellery, music and artwork, was bustling with a style-conscious crowd. I was hit up by friendly entrepreneurs offering beautifully-crafted goods, like graphic TeamManila tees at the Kapisanan Phillipine Centre booth, and artists sharing their works, like Toronto's own one.free.bird, who was selling her delicate paintings and prints. 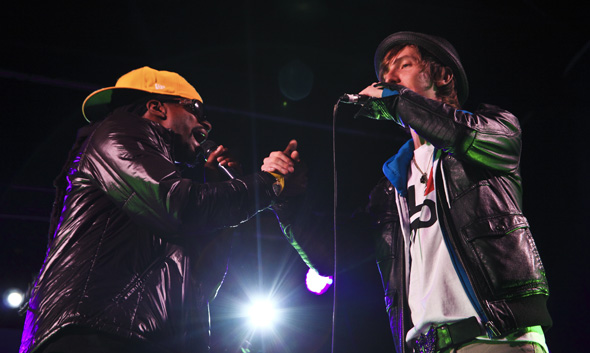 A Trinidadian superhero from Heroes of the World - a Toronto-made comic about country-based caped crusaders-hung around and posed for photos as struggling rappers and hip hop artists from the GTA and beyond, including underage sibling duo MintvsCrow, hustled their mixtapes to those willing to listen. And the apparel. Oh, the apparel. I regret not bringing cash money to deck myself out in gear from Toronto's cream of the culturally-aware clothing line crop, including Fort Apparel, Afrodelik Designs and Stolen From Africa. 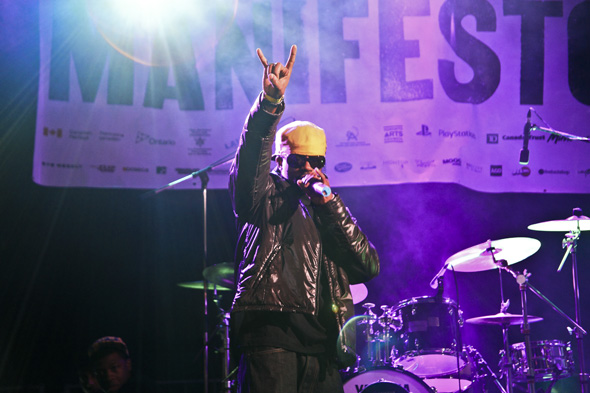 At the centre of the Square, was the main event-a gigantic stage graced by over 20 of your favourite (or soon-to-be-favourite) hip hop performers. Spitting out rhymes were Winnipeg's own Grand Analog, fronted by Odario Williams. 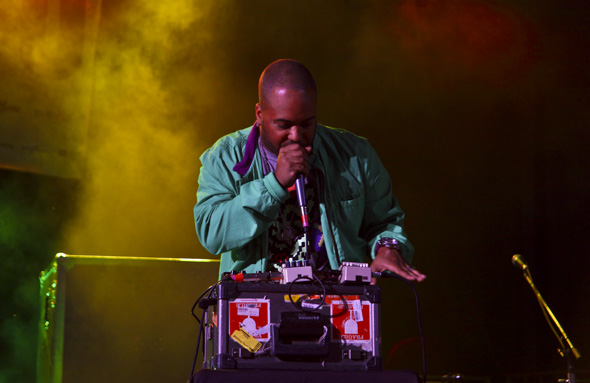 The soul and dub group, described best as a mix of rap and roll, had the audience as pumped as possible on a Sunday afternoon. Other highlights include a dance hall-flavoured hip hop number by Bajah + The Dry Eye Crew, all the way from Sierra Leone, and a sick-but-too-short set that included a killer beat-boxing interpretation of "Murder She Wrote" by the Roots' very own multi-talented Scratch. 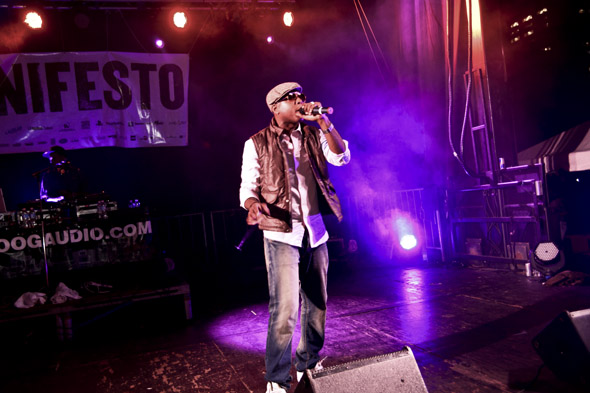 And, of course, the actual main event-critically acclaimed hip hop duo Talib Kweli and Hi-Tek, performing as Reflection Eternal, who ended their kinetic evening show on a high note with a crowd-pleasing rendition of "Get By." 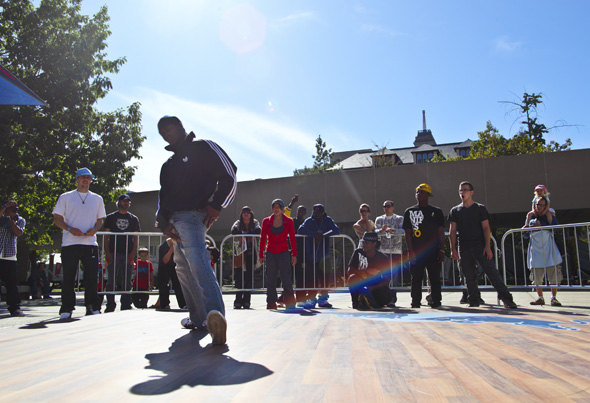 Just north of the main stage, a makeshift dance floor was ravaged by Canada's best dance crews, including the Supernaturalz and the Rude Bwoy Posse. Every where I turned, some raw b-boy (or -girl) was toprocking, windmilling, or headspinning and even, gasp, popping and locking. The breaking went on late into the night, after the crowd dispersed and the stage was dismantled. 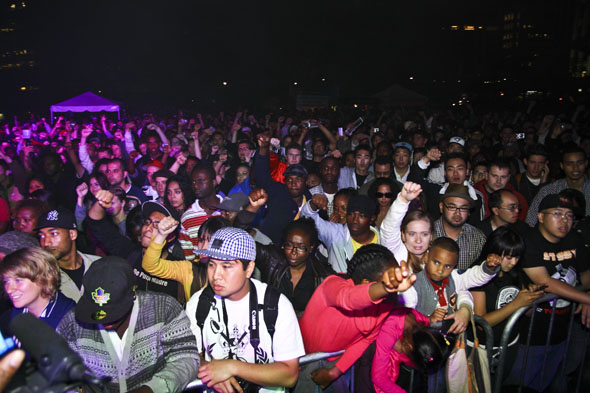 Speaking of late into the night, perhaps you were lucky enough to attend one of the two after parties, held at The Mod Club and across the street at Revival. I... did? As in, I did but don't remember much. Needless to say, the evening got a little blurry after that.... 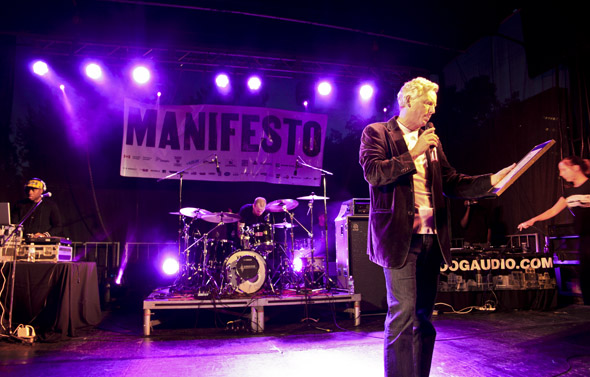 So, there you have it. Although I feel like I've barely skimmed the surface, I spent my Sunday in the city surrounded by the very best of hip hop culture. Nathan Phillips Square was electric. In the words of mayor David Miller, Manifesto is "not just a festival, but a movement." And the dopest, most bumping and grinding of movements at that. 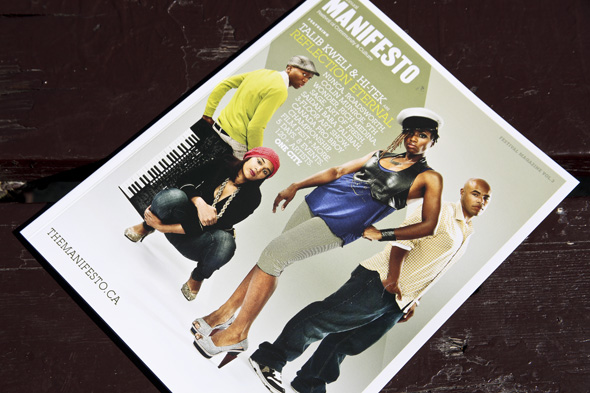