After a bit of a summer vacation from gallery going I was back at it this weekend, taking in a number of fascinating shows at The Department, The Gladstone and the recently moved loop Gallery. I had actually been looking forward to two of the three shows for quite some time, both of which came to my attention via writing gallery profiles. 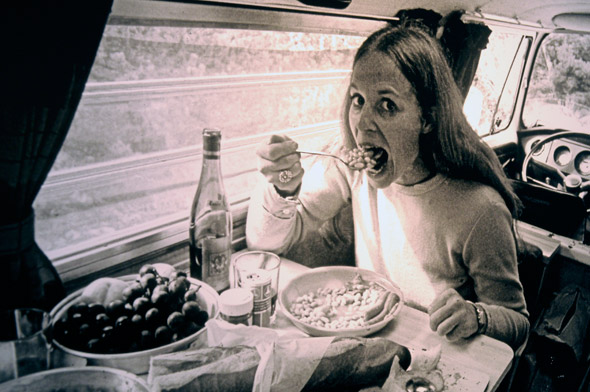 Well, what he was referring to was the recently opened exhibit, Thirty in Twenty, a photography show that documents a two and a half week gastro-odyssey undertaken by Toni and Ria Harting in 1973 that saw them 'collect' thirty Michelin stars. By 'collect' I mean that they ate at a series of Michelin rated restaurants which, if added together, would amount to a total of thirty stars. That's a lot of fine dining! 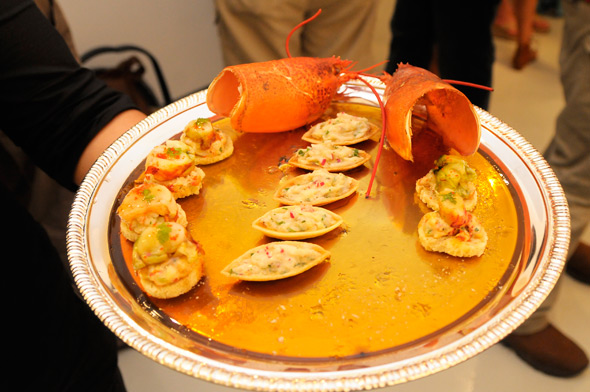 To fit it all in and in order to be able to afford it, the Hartings rented a Volkswagen camper van so as to save on accommodations. They also ate as cheaply as possible between their trips to these giants of French Cuisine. And all along the way Toni was snapping photographs that documented their journey. As an art show made up solely of these photos, the exhibition is good, if not amazing or brilliant. As interesting as many of the photos are - most reveal Harting's natural eye for composition and humorous situations - they're more documentary in style and intention than fine art. 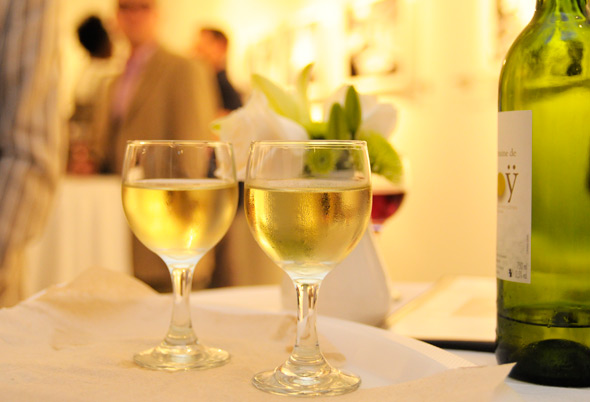 But that's where it gets interesting. To take this archival impulse to the next level, Thirty in Twenty includes a number of nights in which a selection of amuse-bouche found on the menus from which the Hartings ordered (eg. Maxim's, Paul Bocuse, La Pyramide, L'Oasis) are prepared by prominent Toronto chefs. Three of these nights are still to come on September 10th, 17th and the 23rd (ticket info here). 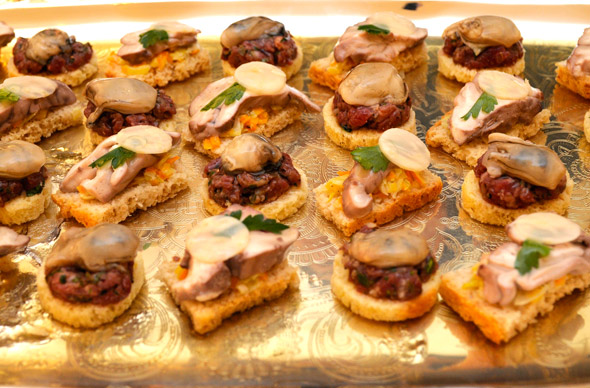 At 60 bucks a pop, they're not inexpensive, but based on my experience they're well worth the money, particularly for those who are passionate about fine food and wine and aren't afraid to indulge a little. I'm certainly not a food critic, but the majority of what I tried was both delicious and ambitious. And it was fascinating to share in the Hartings' intriguing quest by trying the quintessentially 1970s French cuisine amongst the photos of both the restaurants themselves and the time spent in between. And, if you don't feel like shilling out for the food and wine, the fact that there's a wall-sized map of their journey, copies of the menus of some of the restaurants, and other various other artifacts collected along the way makes it well worth a look anyway. 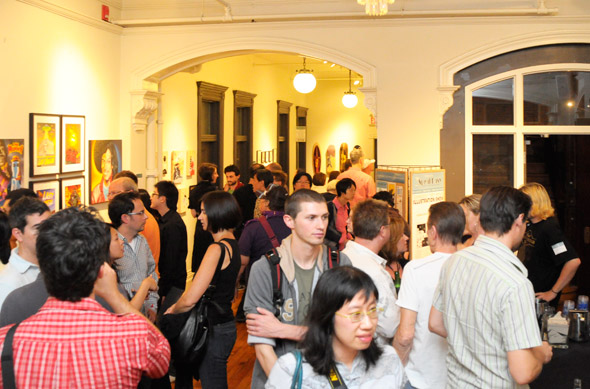 As my belt tightened and my mind loosened, it was time to head to the next show on my agenda. A short walk south brought me to the Gladstone, where David Brown was hosting the annual illustration show in his Speakeasy series. Having heard about the series when I interviewed David about the Case Goods Warehouse at the Distillery District a while back, I was keen to take one of these in.

Started fourteen years ago(!), the Speakeasy series is designed to be an opportunity for creative types to mingle and share their work and ideas. Responding to the isolation that can accompany the long hours spent alone doing creative work, David's hope was to remedy such a feeling by fostering social connections between people with similar interests. 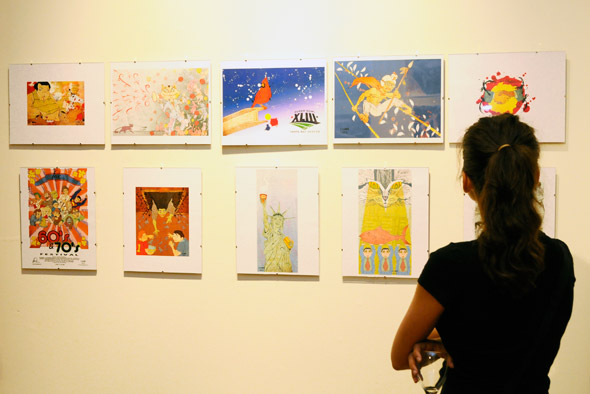 I dare say, however, that it's grown beyond that to some degree, and in a good way. The spacious second floor of the Gladstone was pretty packed during my visit, and there was lots of promising work on display. In other words, you don't have to be an industry-type to enjoy the experience. With work ranging from the socially critical to the downright funny (and including everything in between), the show dramatized just how diverse the creations coming out of illustrators are.

I got the sense that many of the contributors to the show were art students and/or recent grads, and I think it's great that a night like this exists for them to get some experience showing their work (though I'm quite sure a number of exhibitors have shown before). As always, with a show of this size - there were 24 artists' work on display - it's tough to make general interpretive statements. But, suffice it to say that David's getting enough submissions these days to be very discerning. 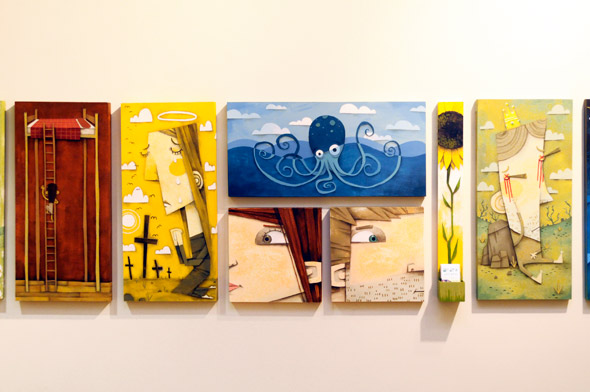 If there's a downfall it's that these are single night shows. I normally avoid reviewing these because by the time I've written something, it's no longer possible to check the work out. I make an exception here because the series is made up of a number of nights over the year, and there will be future opportunities to attend one in the next couple months. If you're looking for a little stimulation from an enthusiastic and creative bunch of people, these could be just the ticket. 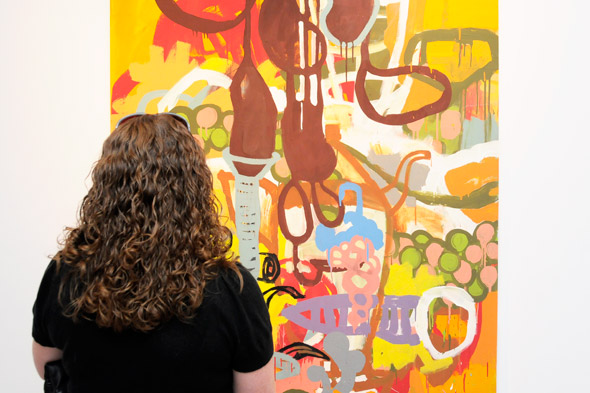 After extended stays at both the Department and the Gladstone, I had to wrap up my gallery going for the night. But on Saturday I was back at it as I headed down to the new location of loop Gallery (stay tuned for a profile of the space). For their first exhibit at this location they're showing Cluster by Gary Clement and How Things Work Underwater by Richard Mongiat. 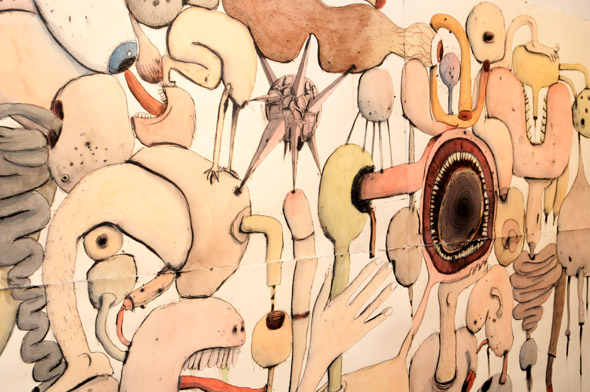 Both sets of works are engaging and visually appealing, but I found myself very intrigued by Clement's three-pronged approach to staging the 'clustered' nature of the matter that makes up, well, everything. His paintings variously depict urban landscapes, night skies and body parts. Indeed, on my first walk through I actually thought there were more than two artists' works on display. But, after slowing down and contemplating what I was seeing (and reading the exhibition description!), things started to fall into place. While it's obvious that all three of these different categories of objects are made from the same building blocks, by drawing them into juxtaposition with one another, there's a defamiliarization effect that invites one to dwell on how profound this simple fact really is.

Mongiat's paintings, on the other hand, had a calming effect on me. Although they lack the typical bluish tones associated with depictions of water and what exists under it, Mongiat succeeds in suggesting that the objects he depicts are indeed underwater by his loose brush strokes. I continually got the sense that these paintings could somehow take on an animated quality, the flow of a current gestured to in the often circular and flowing depictions of underwater life.