Art Agenda: TOAE, Play at 47, Barometric Reading Series at LE Gallery, Get Over It at Show & Tell, Luke Painter at Angell Gallery, Decimals Rebuilt at Function 13

This weekend's already been a busy one for gallery going, with numerous show openings and the arrival of another installment of the annual Toronto Outdoor Art Exhibition (TOAE). In fact I think I'm suffering the effects of overstimulation. Not only did I get to check out more exhibitions than usual, I was genuinely impressed with virtually all of them.

Here's a quick rundown of my favorite events and openings to check out this week.

Continuing throughout the day today, the TOAE is one of my favorite en masse art events. Hosted at Nathan Phillips Square, the work of approximately 500 artists is featured this year. Although the art on display ranges all the way from the pedestrian to the profound, the experience of chatting with the artists about their work is always rewarding. With so many exhibitors to choose from, it may be a bit unfair to highlight only a few favorites, but I can't help sharing some of the artists whose work I really admired. 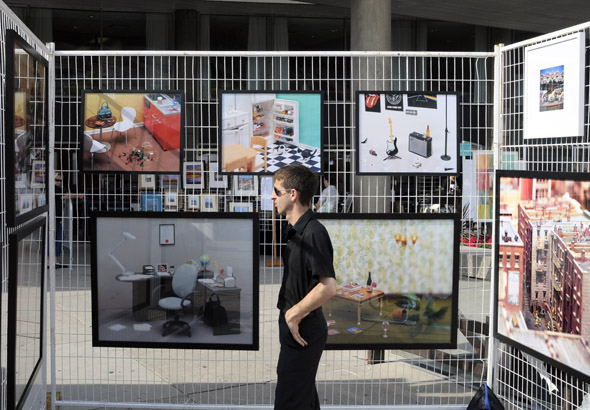 As a photojunkie, I found Martie Giefert's (booth 359, green section) large format series of hockey arenas technically superior and visually stunning. The same holds true for the work of Lizzie Vickery (turquoise, 528), whose selective focus prints are just beautiful. I also truly enjoyed the digitally manipulated images of Alex Kisilevich, which gesture to Gregory Crewdson's work without imitating it.

Moving away from photography, I deeply admired Jason Cantoro's intricate prints (turquoise, 572), Rebecca Ott's series of paintings depicting highways and overpasses (pink, 109), and Jerry Campbell's Edward Hopper-like paintings of Toronto (turquoise, 571). But there really is too much good stuff here to gesture to in summary. I suggest doing multiple laps of the exhibition so as not to miss anything! 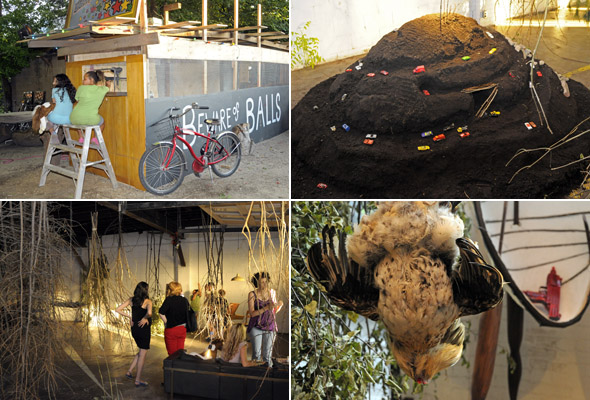 In addition to the TOAE, I made sure to attend a number of the exciting openings taking place on Friday and Saturday. My first stop was at one of my favourite galleries, the recently opened 47. Currently on display is db johnson's exhibit, 'Play.' At once lighthearted and critical, this installation explores the ways in which childhood games and play are underwritten by violence and aggression. Laid out as a series of 'stations' that depict various instances of 'play,' visitors are invited to consider the degree to which early amusement activities are exercises in sublimation. It even features a shooting range! And while I couldn't resist firing off a few shots, this bit of fun was tempered by the realization that this particular aspect of the exhibition deftly demonstrates just how intertwined cruelty and play can be. 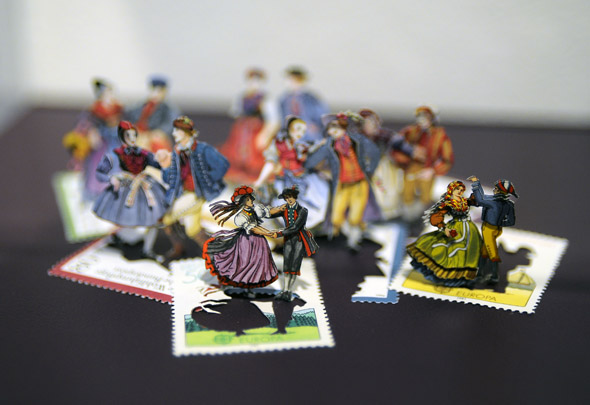 From 47 I was then off to Dundas and Ossingtion to check in on openings at both Show & Tell and LE Gallery. On at LE is Barometric Reading Series 1, a presentation of Young Canada, which stages group shows that feature up and coming Canadian talent. Although perhaps a little uneven - there are five artists featured in the show - the majority of the work on display is impressive and challenging, and lives up to its billing as a barometric reading of the diverse practices of contemporary artists on the rise. I was particularly taken by Kristi Malakoff's miniature sculptures, which boggle the mind with their size and precision, but there's plenty of other pieces to like here as well. 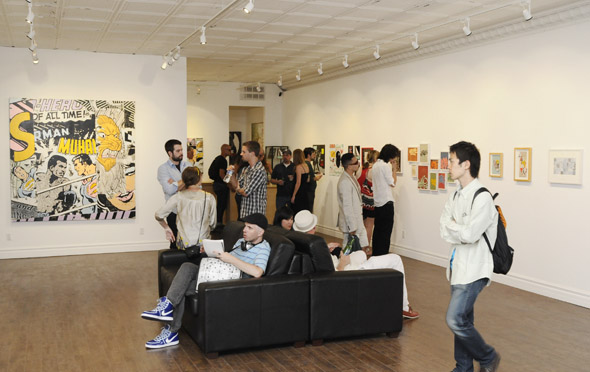 A short walk east took me to Show & Tell, where Simon Cole has once again managed to put together an exhibition that showcases the exciting developments that continue to take place within the lowbrow arts scene. Featuring works by American artists Steve Powers, Greg Gossel and Greg Lamarche, "Get Over It" provides a nice sample of some of the various sources and influences that inform the practice of this style of contemporary art. It's not difficult to see traces of graffiti, comic-style illustration, and even commercial design in the different pieces, but it's also clear that these artists surpass these roots to create works that challenge the clichĂŠs and stereotypes that are often associated with these putatively simplistic and uncritical art forms. 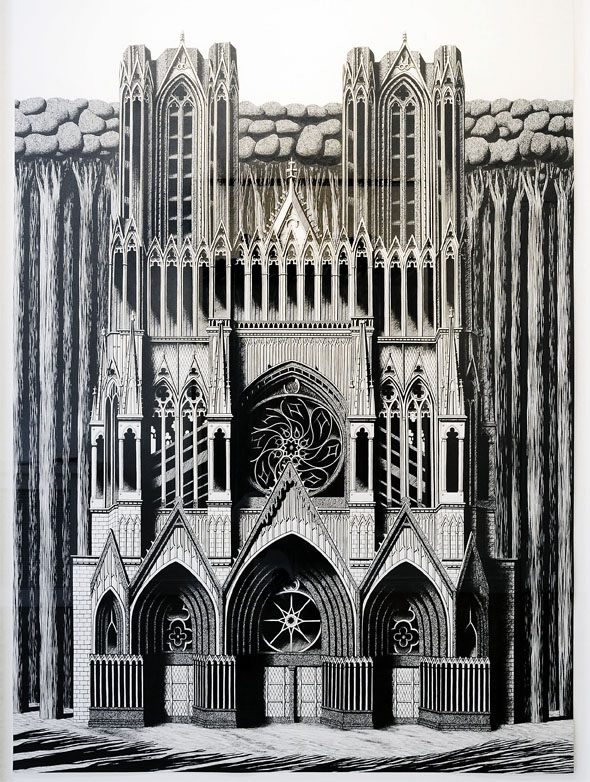 Saturday afternoon also saw two more exciting openings in the form of Luke Painter's show, 'Revival-esque,' at Angell Gallery and MEDIAH's 'Decimals Rebuilt' at Function 13. Although Painter has only a few works on display for 'Revival-esque,' the two main pieces featured at the front of the gallery go considerably towards explaining why: these are dramatic and stunningly intricate works of ink and brush on paper. Located on either side of the gallery, they're collectively titled 'Rural Gothic Reversal.' Their oppositional orientation and the fact that they depict the inside and outside of the same cathedral operate to place the viewer in both places at once, a visual cue that foretells of the other works' fascination with anachronistic combinations and temporal ambiguities. 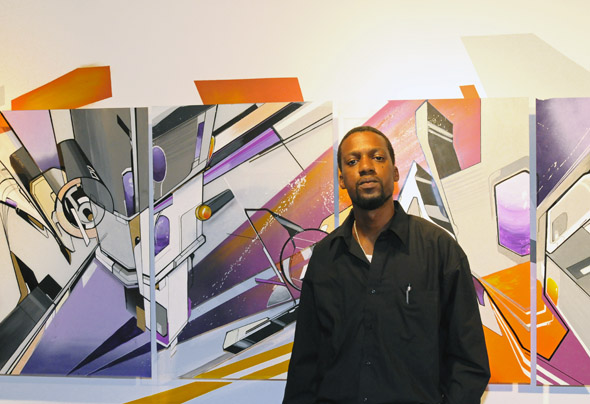 This fascination with time is also seen in MEDIAH's video animation that narrates an abstract history of decimals (rendered as characters) and the formation of mathematics. Along with this animation, the other pieces in the show participate to create a sort of self-contained fantasy world that shows off MEDIAH's artistic range and influences. Originally known for his graffiti, these current works employ everything from watercolour to spray paint and are visually striking, to say the least. Make sure to watch the video before trying to interpret the meaning of each work; my suspicion is that it ties everything together.

For the runtimes of the above shows, please visit the gallery websites.