This past week was another busy one for art openings in Toronto. And with mostly good art on display, artists in attendance, and an unusually high number of the galleries offering free drinks, I was reminded once again why gallery openings can be so much fun - that is, apart from the hangover the next day.

Here's a round-up of some of my favorite shows from last week, including Summerfires at Galerie Lausberg, Vice Photo Show at Lennox Contemporary, Scott Conarroe at Stephen Bulger Gallery, Wayfaring at Gallery 1313, Elizabeth Dyer at Barbershop. 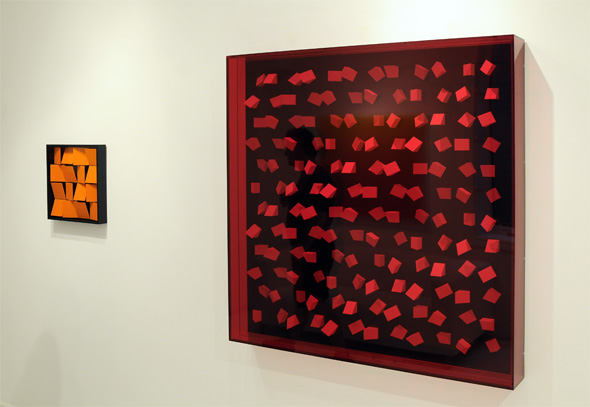 Aided by the city's gallery geography, my show-hopping followed a convenient route along West Queen West. My first stop was at Galerie Lausberg, which is hosting a group show entitled 'Summerfires.' Featuring well established artists - e.g. Klaus Staudt, Thomas Deyle, Christian Bernard Singer - the exhibition offers an intriguing, if implicit, take on the relationship between the natural and artificial. 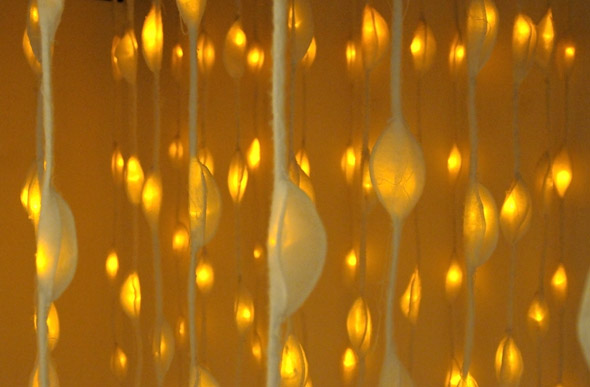 Curator Julie Oakes has done an excellent job in juxtaposing, for instance, Singer's eco-installations comprised of actual moss with Staudt's plastic (polystyrol) constructions under Plexiglas, which suggest both the structure of a cell and the geometric principles that underwrite the natural world in general. Similarly, Jim Ruxton and Camille Turner's computer-generated light installation, 'Sync,' recalls a field of fireflies illuminating the night in unpredictable intervals. The piece is both fascinating and calming, and I suggest dwelling at it for a while.

Vice Photo Show at Lennox Contemporary:
Having achieved a temporary state of relaxation courtesy of my experience viewing 'Sync,' I was off to the Vice show at Lennox Contemporary. Decidedly less calming, I did, however, arrive before it got particularly busy and certainly enjoyed the free beer. A bonus of my early arrival was the fact that the modest crowd allowed for a pretty thoroughgoing look at the work of Dana Goldstein and Jamie Taete. 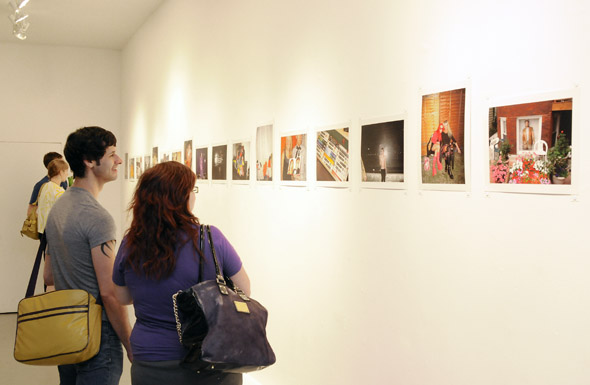 Unfortunately, I can't say I was overly impressed with either artist's contributions, though I was more engaged by Taete's depiction of celebrity adoration gone overboard. Both Goldstein and Taete practice a sort of street/vernacular style photography with obvious influences coming from Diane Arbus, Garry Winogrand and, in the case of Goldstein, William Eggleston. That's great company to be in, but not if your work is derivative. I'd stop short of saying this is completely the case with these two photographers, but I did have the uncanny sensation that I'd 'seen' a number of the photographs on display before.

Scott Conarroe at Stephen Bulger Gallery:
A short walk from Lennox to Stephen Bulger Gallery offered the opportunity to take in a completely different type of photography. Scott Conarroe's 'By Rail' is a series large format prints that document his fascination with the North American railway system. Gorgeous and technically superior, these works demonstrate a great command of natural lighting conditions and the wonderful detail that can be captured by the view camera. Not only that, the focus on this oft-forgotten artery of commerce (and travel) is a simple but captivating way to consider the transformation of both the economic and built landscape of this continent. 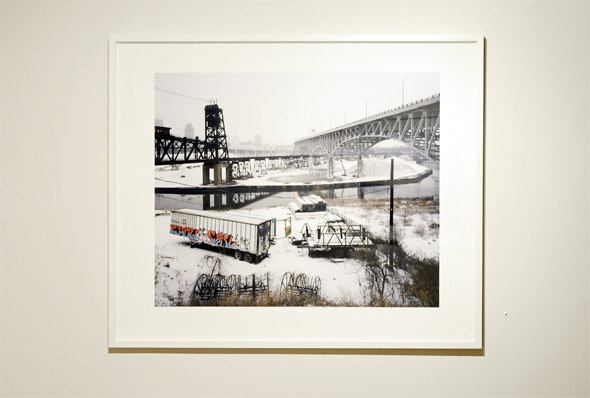 As the opening was quiet when I stopped by, I had a chance to chat with the insightful and articulate artist for a bit. When I mentioned that the roaming quality of the series reminded me of Stephen Shore's 'Uncommon Places' and Joel Sternfeld's 'American Prospects,' he humbly responded that he "was no Stephen Shore" but was indeed influenced by these artists' work. And yet, the decision to concentrate on railways was also meant to maintain a certain distance from these famous documentations of America from the road. I think he's achieved just that with these works, which are some of the nicest photographs I've seen in quite a while.

Wayfaring at Gallery 1313:
Still excited by Conarroe's photos, I made a quick stop at Gallery 1313 to have a look at 'Wayfaring,' a promising group show featuring the work of 3rd year undergraduate students in York University's photography department. As is often the case with shows of this nature - i.e. those that bring together the work of a class of students - the curators struggle to justify/explain why the works share a common thread over and above the shared educational background of the students. Using the concept of wayfaring to denote the movement involved in personal artistic growth is surely a good attempt to create coherence, but nevertheless remains overly general, and might just as well have been applied to the works after their submission. 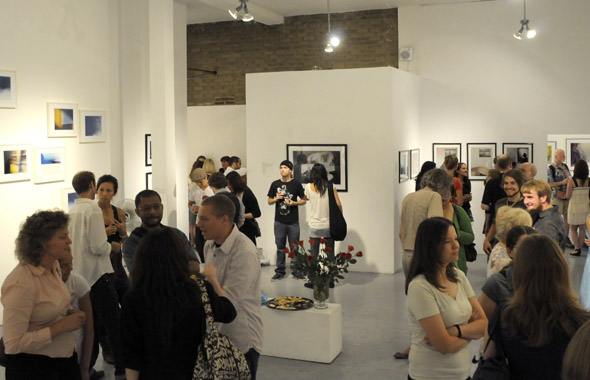 But to concentrate too much on this minor shortcoming would be unfair to the artists involved and the challenges faced by the curators in putting together a show comprised of the works of multiple artists that were developed over the course of an academic year. The important thing is that there is some fantastic work here, and it's always exciting to take note of talented artists at the beginning of their careers. 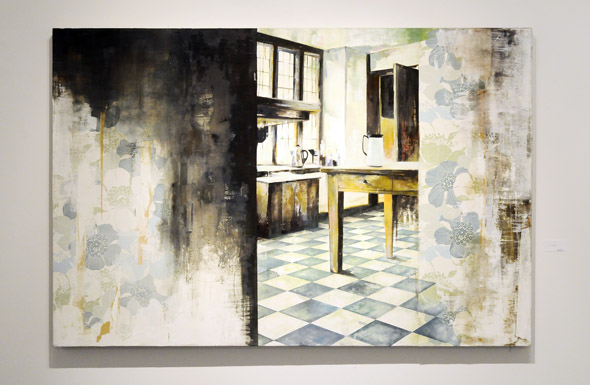 My last stop took me to the end of Queen St. and the Barbershop Gallery for Elizabeth Dyer's solo show "Relationship." The last time I checked out Dyer's paintings I cited a certain consideration of memory and nostalgia that I thought defined her portraiture. With these new works, she's shifted gears by turning her focus to rooms rather than people, but instead of moving completely away from her earlier thematic focus, I think it actually gets a more complex treatment.

As she gave me a quick tour of the exhibition, Dyer explained that each room had been important at times in her life, and that she thus had a certain intimacy with the spaces. And yet, viewers can't help but notice that her depictions of them never feature people occupying the spaces. What we do sometimes see, on the other hand, is the trace of the various inhabitants' presence. I view these traces as a sort of personification of the memorial energy certain rooms seem to contain. And when combined with the formal layering of actual wallpaper with the painted image featured in a number of the works, I get the sense that Dyer is gesturing to the give and take relationship that defines our relationship with the environments that surround and define us.

For a heads-up on upcoming openings and more information about the run-times of the above, make sure to check out our events section.