Wise Daughters Will Save the Economy

If you don't work, make: that's the message Mary Breen, owner of Junction craft hub Wise Daughters, is trying to pass on. It's no coincidence that the first major crafting revival since the 70s is coalescing around the largest recession in a good long while. Crowds of Torontonians are sourcing their artistic side to supplement their dwindling incomes with the assistance of online arts + crafts kiosks like etsy.com.

Wendo van Essen, one of the 40 Canadian artists whose work is sold at Wise Daughters, told me that bust economies are boom times for DIY crafts. Toronto crafting hotspots like The Knit Cafe and Wise Daughters are part of a budding DIY movement that's way bigger than gimp or friendship bracelets were. A surge in interest has meant that craft meetings, like the moose-head-trophy felt-sculpture-making workshop Wendo led at Wise Daughters last night, sell out.

"The workshops are completely geared towards people who think they have no artistic talent," said Mary, a self-described ex-executive director of everything. "Too many people think that because they can't draw a realistic picture, they're not artistic." But most people have artistic talents beyond visual art and workshops at Wise Daughters allow people to try out old crafts and new designs, and walk away with a handmade trinket of their own artistry.

There's certainly more to crafts than knitting needles and coloured-pasta necklaces. April workshops at Wise Daughters include a sock-monkey-making lesson and a collage art class. Step-by-steps for book binding, bag-making and handmade projects that re-use and re-purpose found objects are the meat and potatoes of recently-published crafts super-books like Handmade Nation. Electronics projects, like you might find at Make, are becoming more mainstream as well. 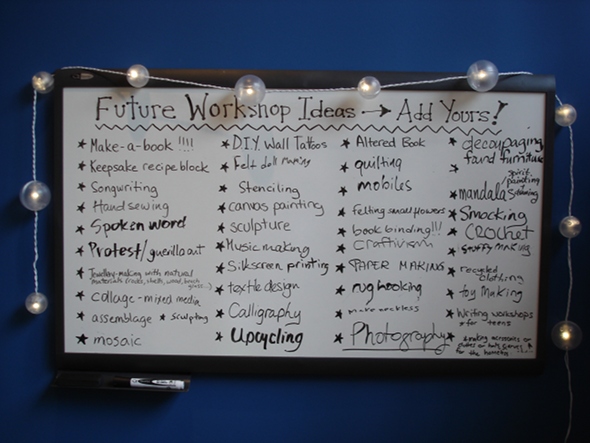 "People always say 'I can't draw a straight line!'" laughs Wendo, who works as a freelance animator in her day job. "A straight line is hard to draw." Wendo has been an animator since 1981, and if you've seen Anastasia or the Goofy Movie, or any of 18 other titles, you've seen her handywork. She started felting at work in in 2002 while she waited for her employer to come through with a paycheque. She told me that there was a lot of anger in her first sculpture, Jezabel, a sexually powerful sculpture like the one that heads this article. 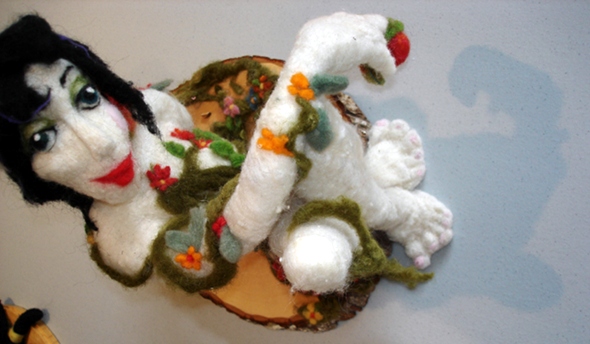 As any ink-stained kindergarten kid knows, arts and crafts are simple fun. But what Mary calls the "craft renaissance" has a strong community component to it. Knitting circles, hosted weekly at Wise Daughters and at the Knit Cafe on Queen, are being flooded with eager knitters of all ages. Another change is that degree to which families are substituting more expensive activities with craftmaking. "I find a lot of people are doing more with their kids," Mary told me.

I asked her to describe the changes in the market: "More people are trying to make it their vocation," she said in response. Her point is that these days auto workers are as likely to starve as artists, and the line between the two roles is thread-thin. And more people are turning to handmade goods instead of mass-produced ones, partially because of an interest in buying locally and responsibly, and partially because arts and crafts are easier on thinning wallets.