THE BOOM shakes up Supermarket

THE BOOM is a local skit gang (a title they prefer over sketch troupe) who are celebrating 12 months of consistently sold out shows and gritty, edge-of-your-seat comedy with their Birthday Show tomorrow (Thursday) night.

Scheduled to join THE BOOM are special guests Nikki Payne, Boyd Banks, Darren Frost, Paul Belini, Mark Forward and more of the best in Canadian comedy. Payne had me in stitches when I saw her recently at The Comedy Bar, where she was workshopping My Big Fat Donated Kidney.

I caught up with THE BOOM head writer and producer Dan Galea (pictured below) for a Q&A about his skit gang.

Why did you shorten your skit gang name to THE BOOM from Boom-shaka-laka?

"Well first off, I couldn't spell Boom-shaka-laka. THE BOOM just makes things easier for everyone. Plus it has a nice ring to it." 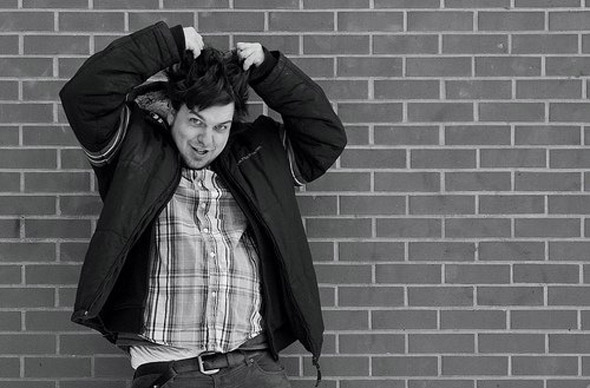 How do you formulate the writing for this show?

"Three ways. Way number one, we all meet in a cave were there are gases that have proven to be very harmful yet thought provoking to our minds, we then yell at each other for hours on end until one of us makes sense or gets naked.

"Way number two, we like to hang out as friends (with no gas) and make each other laugh, so a lot of funny shit comes out of that. The other way, or way number three, we have pitch meetings every Sunday and we all write and bring stuff in to pitch. Sometimes we write in teams, most of the time we write alone and bring things in."

Do you work with the "skit gang" to formulate ideas, or is it more just you telling them how it plays out?

"I work with everyone in the gang. If an idea doesn't make it on the show, they're always welcome to improve said idea and 99.9 percent of the time they do. At the end of the day, I choose what gets in, but I really rely on how well things go over in the read through, so in a lot of ways they're picking what gets in themselves without really even knowing it... But they know it."

How has THE BOOM Show evolved since it began?

"In the beginning the group was doing a lot of great work actually. The only real problem was the direction and length of some things. The writing, which is the hardest part, has always been there. Now they're a little more mature, comedy-wise, and even a bit more serious about this being something they can do for a living. The shows are a lot more consistent. And I finally convinced them to stop eating gorilla meat. So I think that really helped things out."

Has the lineup changed, or are you still the same core members?

"A few members are no longer members and some new members have been added. The core, however, is basically the same. Only now they're hardcore members. The only real difference is the addition of me, Nikki Payne, Deborah Robinson, Shefi Asher and Jen Martinovic. We needed some girls and we got some good ones."

Do you write certain skits with certain members in mind?

"I do and I don't. Half the time I will write something and then think that someone would be perfect for the role. Sometimes I'll write something with someone in mind to play a character. Overall, we all write very differently so we all have our own ways about us."

Where do you get inspiration for your material?

"We get a lot of our inspiration from the news, surprisingly. Oh, and dicks, vaginas and farts. But also the news. The internet has also shown us that it's got a lot to offer, material wise. Like our video 2 Girls 1 Cup: Defenders of Justice. That's totally internet related."

What's your favourite skit that your group performs?

"Wow. Um, that is a question. We did a show that was more a giant sketch or comment on religion and heaven and hell and gods and I think that was my favourite thing we've written. We wrote it as a group and kind of melded it together to make a great thought- provoking yet ridiculous show on religion. I would love to do a fringe show or something with it. I also like The Cottage. Ha."

Who are your favourite sketch comedy performers in Toronto?

Have you been to The Comedy Bar? What are your impressions of that venue?

"It's alright. I mean, its great to have another comedy venue in the city. My friend Gary Rideout Jr., who was in the Sketchersons with me, is one of the people who opened it and he has a lot of heart, so I believe it will do well. As a venue it will only get better, but I feel like it always takes a while to work out the kinks. The food's great."

Why did you choose Supermarket for your venue?

"The Supermarket was the only place that could consistently offer us the same night every month. They gave us the first Thursday of every month. With this we are able to build a fan base that always knows when we are doing a show.

"It's an amazing place. It has the perfect stage and seats, a great amount of people and is in the heart of the city, Kensington Market. The staff ain't too shabby either. Also the food is great!"

What can attendees of Thursday night's show expect?

"They can expect some of the funniest sketch comedy they've ever seen. A lot of people come up to us and say, 'We don't normally like sketch, but this was amazing!' We love that compliment. The best comics and musicians in Canada perform on our Thursday shows, and that's just a fact.

You went to New York City recently to film a pilot for Comedy Central. How'd that go?

"Not very well, I'm afraid. We killed the producer with a knife. We all took turns and before we knew it he was dead. R.I.P. Jimmy. Who would've thought you could kill someone with arm wounds, huh?

What does the future hold for THE BOOM?

"This year has already been explosive for us. Opportunity is at every corner. We are planning a trip to L.A. in April. Hopefully Montreal as well. And they want us back in New York as often as we can get there. At the end of the year we want to head to Las Vegas, but we'll see. All this stuff costs money, which comes out of our own pockets for now, so it's kind of hard."

"Our show only costs five dollars regularly. It's so cheap that you all have a chance to experience it. We make very little money at our shows. We do it because we love doing it and we love you all. So show us some love back and I promise you won't be disappointed.

"Peace out! Word to your moms! Check out our website or join our facebook group for more info."

THE BOOM show is tomorrow (Thursday) night at Supermarket (268 Augusta Ave., just south of College St. between Bathurst and Spadina).