It Would Be a Travesty to Miss This Play

Tom Stoppard has a way with words.

Stoppard was described by Robert Berkvist in the New York Times as "a verbal gymnast, whose plays are notorious for standing logic on its head and history on its ear."

His play Travesties, which opened Tuesday night at the Young Centre for the Performing Arts, is no exception. It's exceptionally written and superbly executed by a talented cast, launching Soulpepper Theatre's 2009 season.

Travesties spins a tale in which the lives of Vladimir Lenin, Tristan Tzara and James Joyce converge in a Swiss library. There's plenty of witty, often subtle, innuendo. If you're not paying close enough attention, you'd likely miss some hilarity. 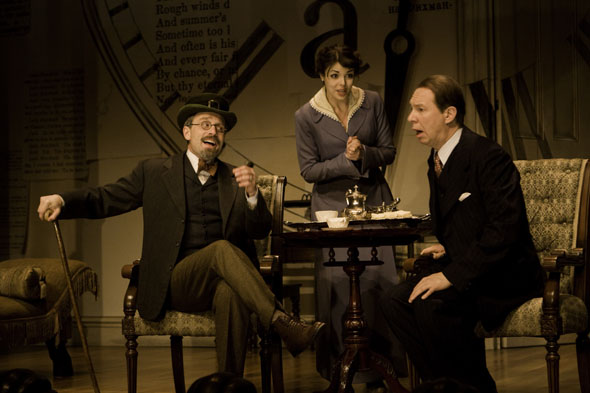 The banter between Joyce (above left, played by David Storch) and Tzara (top photo, right, played by Jordan Pettle) is particularly entertaining. Tzara is the Romanian dadaist, continually impressing his views upon the rest of the characters he encounters. While Joyce is often the target of much of the comedic repartee.

The narrative is told in part by obscure bureaucrat Henry Carr (pictured in the dark suit, played admirably by Diego Matamoros) whose often verbose lines are a feat in themselves to deliver. When Carr retells his stories of Joyce and Tzara, they're often imbued with the scattered memory of an amnesiac old man that he's become.

At one point I'm not sure if he actually flubs a line or two or if it's part of the script. But it doesn't matter. The result is just as entertaining.

Stoppard's play often pokes fun at society's dismissive conservative attitudes to art, which rings true for us in Canada today just as much as it did in England during Joyce's time. It's refreshing to hear historical and literary characters debating the relevance of the art of the day.

My introduction to Stoppard came back in high school, when we got to read Rosencrantz and Guildenstern Are Dead, a farcical send-up of two minor characters in Shakespeare's Hamlet. 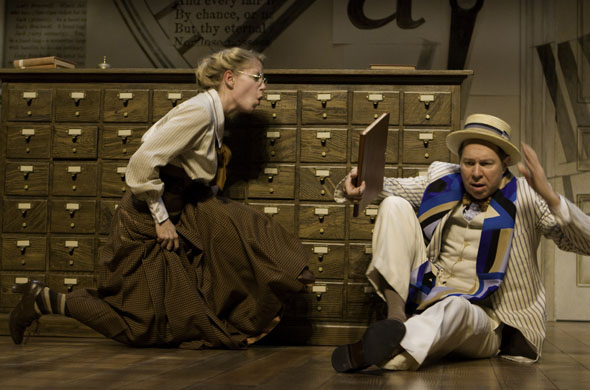 The simple stage backdrop of a large clock motif served well to lure the audience into the story. There were a few pleasant surprises, such as projected images onto the clock and in one instance, actual movement of the clock's giant arms to particularly punctuate the point in one scene.

Like a good book, Travesties takes some time to get through. Clocking in at just under three hours (including a 15-minute intermission) I guess you could say that the play is either filled with too much dialogue or you really get your money's worth.

I look forward to Pettle's next role in Soulpepper's production of David Mamet's Glengarry Glen Ross, incidentally directed by Storch who played Joyce in Travesties which opens April 2.