Your Guide to Nuit Blanche 2008

In just a few days, the entire city of Toronto will get their all-night party on at the third annual Nuit Blanche. With over 195 exhibits and just under one-million visitors expected to attend, if you haven't already started planning your evening now's the time to start!

Since the official Nuit Blanche maps and information can be quite overwhelming, I've put together my own little guide to what the night has in store and which exhibits you won't want to miss. Check out this interactive map, exhibit highlights, and tips to help you tackle Toronto's all night contemporary art thing.

As always, the party starts at sunset (6:52pm) and goes right through to sunrise, with many places around Toronto staying open to accommodate the all night affair. TTC is extending its hours of operation past 1:30am, but only in certain areas. The Yonge line from St. George to Eglinton Station, as well as the Bloor line from Christie to Broadview Station, will remain open all night long - until 7am the next day. Don't forget that on Sunday regular transit won't start until about 9am.

Depending on what time you decide to head out, you may or may not hit the crowds. 8pm to 1am are generally considered peak hours, with a wave of stumbling audiences after last call. This year organizers have promised to address the cramped audience space by letting us experience art on a massive scale. Many exhibits are geared towards larger crowds, and there are enough smaller shows to accommodate everybody. Here's a few of my picks: 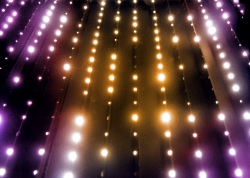 Domaine de l'angle at Massey Hall
"The Quebec City-based art collective BGL is known for installations that take over architecture and wryly comment on institutional space. BGL will construct a 40 metre long drop ceiling in the alley of St. Enoch's Square beside Massey Hall, framing the dumpsters, recycling bins and other life of the alleyway in the cool fluorescent light of the modern office." 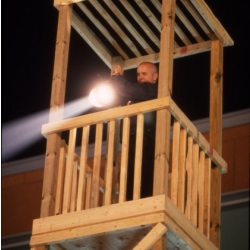 Fifteen Seconds at Dundas Square
"Daniel Olson's work, "Fifteen Seconds", is inspired by Andy Warhol's famous dictum, "In the future, everyone will be world-famous for fifteen minutes." From a small guard tower equipped with a follow spot - a familiar scenario appearing in countless films - Olson will highlight certain people, transforming them into instant celebrities. In this performance everyone is offered the chance to have their moment of fame."

Into the Blue at Eaton's Centre
"Fujiwara Takahiro's "Into the Blue" is a giant, illuminated, transparent cone-shaped balloon. Its shape is achieved through the stacking of inflatable donut-shaped soft acrylic tubes of successively diminishing sizes."

Zombies in Condoland in College Park
"Zombies in Condoland is a series of night actions that mimic a film screening set for a low-budget horror film such as the type made famous by George Romero. Anyone can participate and be a zombie. They are encouraged also to do their makeup en route, in cafes, bars, and mass transit. There will also be make-up tents and zombie clothing available on site."

Waterfall at HydroOne
"Katharine Harvey will suspend a "quilt" of recyclable plastic from the north side of the Ontario Power Generation Building, suggesting a suspended waterfall. The quilt will be made from recyclable plastic bottles and shaped into sheets of "falling water" by containing them in monofilament nylon netting and sewing the netting together into a quilt."

There's lots more to be seen in Zone A. Check out this map for all my picks as well as highlighted exhibits, or visit the official website for a complete list.

Horroridor at Union Station
"Horroridor is a multi-channel DVD installation utilizing found footage from horror-thriller movies..."Horroridor" strips away narrative to a non-articulated response of rage, pain and frustration, by isolating media recordings of men and women screaming to unknown forces that threaten existence. Viewers will be guided toward a long corridor where they will pass through the approximately 20-foot dual projections of visual and audio recordings of hundreds of people screaming on either side of them. Parental guidance advised."

Toronto Nocturnes I
"In The Nocturns, (night shots), the city is seen with a new focus. Without people, the artefacts are more visible, and together, build an essential, memorable cityscape. Photography is the best medium to represent this night life without humans. The medium is quite unable to 'fix' or suspend life, because life, like time, is fleeting. The exact moment the shot was taken no longer exists."

Commerce Court
"What's going on inside Bay Street's corporate boardrooms? Find out in this film installation starring comedian Roman Danylo as a CEO-on-the-verge-of-a-nervous-breakdown riding the waves of today's fragile economy." 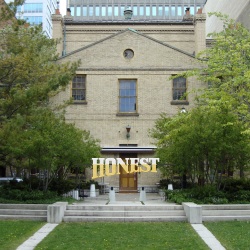 Benefit of the Doubt
"Sculpture and light installation at the site of Court House Square. Between 1826 and 1838, Court House Square was used for a variety of religious and political gatherings. With its proximity to the Home District Court House and the jail, the square was used for public floggings and for punishment in the stocks - their last recorded use: Ellen Halfpenny, for drunken and disorderly conduct in 1834. The first hanging here was on 23 October 1828: Charles French for the midnight shooting of Edward Knowlan.
The most famous hangings, and the last performed here, were on 12 April 1 1838: Samuel Lount and Peter Matthews, for their participation in the 1837 Rebellion." 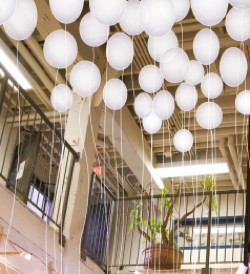 Secrets, Octopus Projects
"The Octopus Project's bi-monthly art series gathers 100 artists to showcase new work in various media on the theme of "Secrets". Visitors of the Case Goods Warehouse will participate in a growing installation of floating, white balloons, writing their secrets on cards and placing them anonymously in a box. Throughout the evening the cards will be attached to balloons and released up to the ceiling."

Zone B also has much more to offer than this small selection, particularly in the Distillery District where installations like Aesthetic Comfort will be part of the excitement. Just like Zone A this map has all my picks. Or, check out the official website for a complete listing of exhibits.

UNTITLED
"Seven figures are dressed in camouflage, a fashion which has become increasingly popular since the War on Terror campaign. Click on the figures and they move. They copy, they imitate. Click one, click two. Choose a leader. Become a leader, and the rest will follow. Exercise 1-2-3-4. One Bend. Two Bend. Three Bend. Stay Look Straight - Don't See - STAY. We allow the media to think for us and amputate individual reasoning. Mental and physical activity slip from the mechanical to the mindless; into fear, chaos and violence against an enemy that does not exist."

Future (? ? ? - - - ? ? ?) Perfect in the parking lot
"Pulsing with a dramatic lighting score indicating S-O-S in Morse code, Brendan Fernandes' towering installation of shipping containers addresses the trauma of migration, displacement and change. The work has a local relevance, reflecting on the politics of gentrification and the displacements inherent to the project of urban renewal."

Overflow at the former Prison Chapel
"2007 Sobey Award winner Michel de Broin is known for suspending a mobile home from a crane, creating a bicycle that generates its own smoke and converting a 1987 Buick Regal into a pedal-operated vehicle. For Nuit Blanche de Broin continues his investigations into resistance, reorganization and chaos with a waterfall flowing from a third story window."

Purified by Fire
"Continuing his exploration of the language, iconography and mythology of cinema, Matthew Suib creates the appearance of a building on fire by using seamless video loops as rear window projections. The work explores the physical and moral gap that separates the West from war and destruction and examines the notion of regeneration through violence." 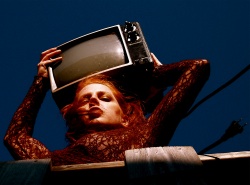 SMASH! Droppin' stuff
"Celebrate the transience of Stuff. Treasured possessions and household objects get a moment in the spotlight before meeting their demise. Stuff is dropped from above and smashed in this intense ritual of destruction, with dramatic soundscapes and live projection."

Eyes on Toronto Marathon Talk Show at The Gladstone
"An all-night marathon edition of Eyes on Toronto, the popular monthly late night talk show. This version, hosted by Stephen Eyes, James Salisko, Keith Berry and Amanda Terfloth will be a non-stop exploration of the performer as artist and individual. The show will include interviews and performances from Toronto's finest; comedians, artists, actors, musicians burlesque performers and more."

As you walk through Zone C, be sure to take in the dozens of individual events on top of these, most going on at familiar places like The Gladstone, The Drake, and local galleries spread across Queen West. Check out this map for even more cool/interactive exhibits like The Artillerist and The Urban Voice Oscillator. Of course, for a completely exhaustive listing, I've already mentioned the official Nuit Blanche website.

There are also several interesting city-wide exhibits going on, involving text messaging and transit media. One of the best parts of Nuit Blanche is when bystanders are involved in the art, whether they know it or not. We'll be sure to bring you first hand of coverage from the night-long party this Saturday October 4, 2008, but in the meantime this guide ought to help get you sorted for an evening of contemporary artistic revelry.

Oh, and if you 'happen' to catch something crazy on camera, be sure to add your photos to the blogTO Flickr group!