This past weekend the 14th annual Fan Expo Canada took over the Metro Toronto Convention Centre. The Expo for comics, anime, horror and science fiction, the show showcases over 600 exhibitors covering 220,000 square feet.

Since its start in 1995, when Roy Thompson Hall was filled with a meager 1400 people, the Fan Expo has grown exponentially in size to become the third largest North American convention of its kind, trailing only the San Diego Comic Con and Wizard World Chicago.

Originally based around comic and anime, the convention has now spread into different genres including horror, gaming and sci-fi. This year, nearly 50,000 attended the three-day event to see stars like Buzz Aldrin, Wes Craven, Sean Austin, Michael Rosenbaum, Henry Winkler and Laura Vandervoort.

On Friday, the pay up-front line-ups were non-existent as many people opted for premium packages and pre-ordered tickets. All was relatively calm until the doors clicked opened at which time, like animals breaking out of a zoo, people scurried through the dealer's room trying to sniff out the best deals.

The key to any convention is to carry only the bare essentials: a sturdy backpack, a wad of money, a charged cellphone, a bottle of water, a working camera and a list of things to buy (your back will thank you afterwards).

The biggest and most common mistake is coming to a convention unprepared for the long day ahead. 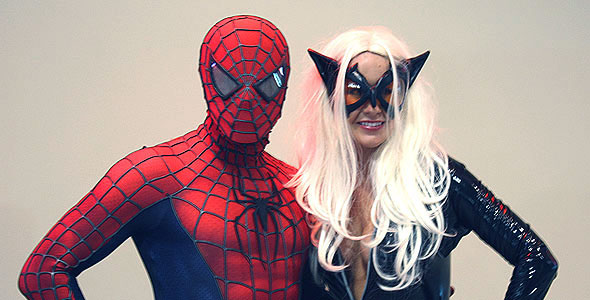 This year Pocky, Japan's favourite milk chocolate snack, was a popular item with dealers selling them for mere pocket change, or even giving them away for free. After sampling way too many of these magical sticks, I suggest straying away from the classic chocolate Pocky and trying the more underrated purple yam and green tea flavours.

Copies of Watchmen, the most celebrated graphic novel of all time, were being snatched out of the hands of dealers at Planet Hobby who were selling copies for only $15. There's a lot of anticipation for the upcoming movie which will be in theatres March 6th next year.

On Saturday, featured guest speaker Buzz Aldrin was given a hero's welcome as fans greeted the aging cosmonaut who still comes across as young at heart.

"It's hard to imagine that it has been 39 long years since the first lunar landing took place in 1969", noted Aldrin. "But after the Columbia space shuttle crash, space exploration has not been the same."

Saturday was also a great day to experience some of quirky games and events hosted by York University's Anime Club. These included Flash!, Anime Name that Tune, Win, Lose or Draw as well as Anime All Night.

At the end of the evening, the lights to the dealer's room began to dim and a horde of people gathered for the fan-favourite masquerade.

Tell us about your favourite experience at the convention!

With contributions from Raj Deut, including the video embedded above.