Toronto doled out its 29th annual Dora Awards, which recognize outstanding achievements in Toronto theatre, last Monday at the Winter Garden Theatre. Awards shows are notorious for running on and on and having copious boring thank you speeches. This one was no exception.

They could have easily chopped the two-hours-plus show in half by eliminating a lot of the out-of-context song-and-dance routines, primarily performed by the show's host, Sharron Matthews. What started out as a joke about Sharon's Party soon became the overriding theme of the night.

About half a dozen students of the Toronto Dance Theatre were on hand to hand off the statuettes to the presenters and usher the winners off stage. It seems a waste of their talents not to let them take the stage to dance. Instead we get a woman trying too hard to crack jokes and flaunt five costume changes, singing unmemorable songs mostly irrelevant to this year's nominated productions. 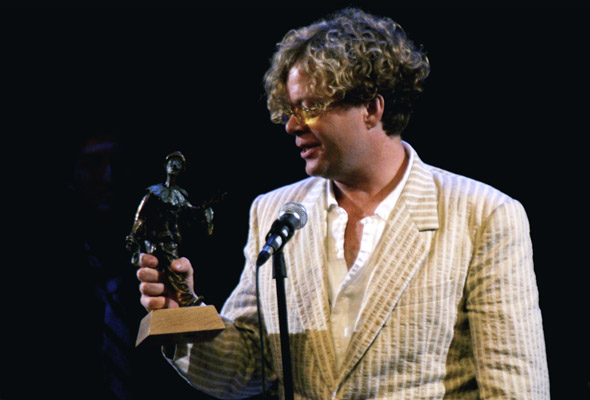 One of the funniest moments of the awards ceremony came when Daniel McIvor and Jim LeFrancois (in first photo) took the stage to announce the nominees for best Outstanding Set Design for Independent Theatre. 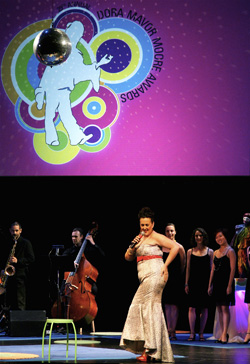 LeFrancois flubbed the play title as Waiting For Godet (instead of Godot) which I found quite apropos considering each winner received a bottle of champagne with their bronze Dora statuette.

The big winner was Fire, a play starring Ted Dykstra (pictured above) that claimed a total of five awards, including:

Alisa Palmer (pictured below) won most Outstanding Direction of a Play in the general theatre division for Top Girls. 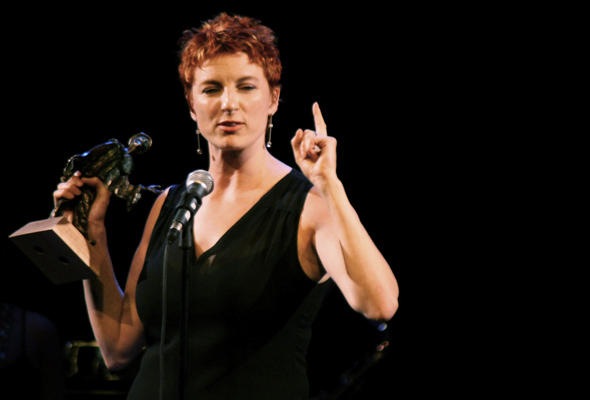 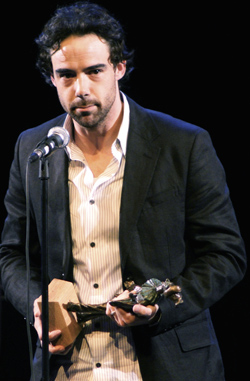 She took too long thanking everyone on her list, prompting the pianist in the stage band to start playing the "get a move on already" music.

But she wasn't deterred. Her thank-you list went on, and included David Bowie, whom she said "helping her through her drug addled teens, growing up in New Brunswick."

Actor Mike Ross (pictured right) gave an earnest acceptance speech for his role in Under Milk Wood, which won most Outstanding Sound Design/Composition. I had previously enjoyed Ross' performance last month in Blink!

There was tremendous potential here to wow and entertain the audience with excerpts from some of the nominated theatre, or at least attempt to create some sort of theatrical show that involved songs or dance by some of this year's Dora recipients.

Alas, it's just a self-congratulatory evening and perhaps my hopes are better fulfilled by this week's Fringe Festival offerings.