Our CONTACT-themed Between Memory and History photo contest is now over; and a pool of judges comprising various members of the blogTO team have selected two winners!

It was a tough choice as usual as there were 200 submissions and lots of thought-provoking, startling and otherwise quality shots among them. The grand prize winner and winner of an an HP Photosmart Pro B8850 Photo Printer, HP 38 Pigment Ink Cartridges with HP Vivera 38 Pigment Inks and HP Premium Plus 13x19 Photo Paper is Jay Morrison who submitted a photo of the much-beloved Roxy Theatre on the Danforth.

The Roxy, closed for some time now, is in the process of being transformed into an Esso gas station.

Truly evoking the Between Memory and History theme of the contest, the winning photographer had this to say about his photo:

This is The Roxy at the corner of Greenwood and Danforth. It was built in the 1930's and I remember it best for being the home of The Rocky Horror Picture Show for most of the 1980's. It has been sitting there, pretty much unused and up for sale, for about ten years. Imperial Oil has bought it and will likely demolish it and put up an ugly new gas station. 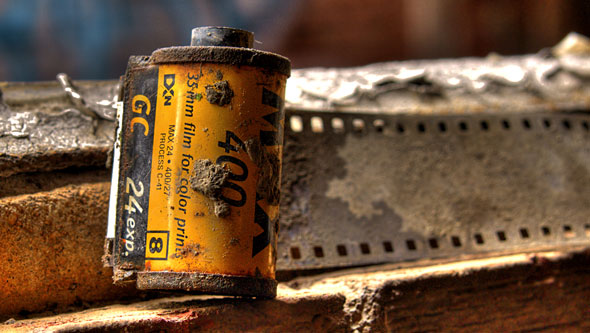 Our second place winner who will receive an HP Photosmart D7460 Photo Printer along with HP 02 Ink Cartridges with HP 02 Series Vivera Inks and HP Advanced Photo Paper is is ~EvidencE~ who submitted the above photo of an exposed roll of Kodak film. Who knows what history was captured and what memories may have been lost when the roll was improperly exposed to the grime and sunlight around it.

Congrats to both winners. You will be contacted shortly with information how to claim your prizes. And thanks to everyone for participating in the contest.