That's right kids... It's back. It's that time of year again where the Gladstone Hotel asks all of Toronto to Come Up To My Room, and take a look at what wonderfully beautiful (and clever and weird and inspiring and playful and intriguing) projects Canadian artists and designers have thought up.

Curators Pamila Matharu and Christina Zeidler apparently do not curate specific project submissions, but instead trust selected designers and artists based on their past work. And to top it off, neither curator is allowed to see the show before doors open to the public. So either way, you're pretty much guaranteed to see a very wide range of work scattered throughout each of the hotel rooms.

This is the Gladstone's 5th year putting on the event, and much like the last 4 years, this year's lineup of artists and designers looks very promising indeed...

For anyone who's new to the event, perhaps an explanation in the curators' own words might shed some light:

"Participants are required to showcase new work and are asked to produce work specifically for this event. Work presented at Come Up To My Room inhabits the cross-over world between art and design. Come Up To My Room is a chance for artists/designers to push limits and explore new territory by showcasing personal dream projects and to refuel or challenge themselves creatively. It is an opportunity to reveal another side of their creative self." 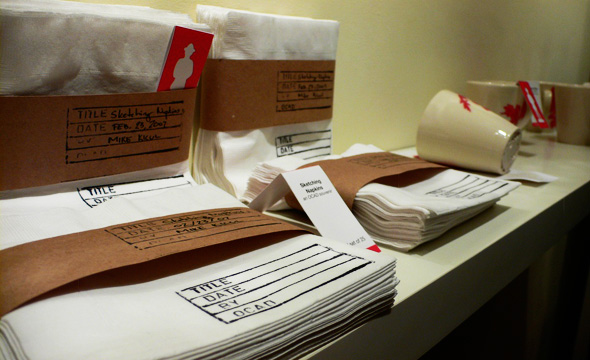 One room that made its debut last year that I'm quite happy to see in the lineup again is Souvenir Shop, presented by Motherbrand (founders of the Canadian Design Resource). The name pretty much states exactly what the project is all about... exploring the social and cultural function of souvenirs in Canada. Motherbrand co-founder Michael Erdmann describes it more poetically by stating, "with an emphasis on small batch production, Souvenir Shop provides a space for design experimentation and a marketplace for objects that reflect local materials and culture."

Perhaps I have a soft spot for these guys because many of the designers involved are actually students from the Ontario College of Art and Design, and being a student of that institution myself, I know how amazing an opportunity a show like this is for a young designer trying to create interesting work. And just between you and me (and the rest of Toronto reading this post), I've had a little preview of some of the student designed pieces for the room, and they're quite beautiful.

Some other personal favorites on the bill are Castor Canadensis, Patty Johnson and the North South Project (which we've posted about once before), and of course, who can forget Magic Pony? Their's was definitely one of the more magical rooms of last year's event, so it'll be interesting to see what they come up with this weekend.

The opening reception is actually this Saturday evening, running from 7-10pm, but the show itself opens its doors this Friday and runs until Sunday. Admission is $6.50 and includes a full catalogue of the show. And right after Saturday's reception is the annual (and free) LoveDESIGN Party in the Gladstone Hotel Ballroom, so make sure you stick around for that!