Slamming All the Way to Halifax

On Saturday night, Hugh's Room erupted with tales of ten-cow wives, late moving vans, men as gorgeous as paintings, American pennies, and women that were "so beautiful." And that was just the first round.

To say the finals of the Toronto Poetry Slam season was intense would be an understatement. Host Dave Silverberg had to make a quick wardrobe change after the first round because of the heat in the room brought on by the capacity crowd — people were sitting on ledges and steps — and the vehement passion brought on by the poets. As this was the finals of the slam season, each artist was fighting for more than just simply bragging rights: the top four poets would be going on to represent Toronto at the Canadian Festival of Spoken Word later this year. 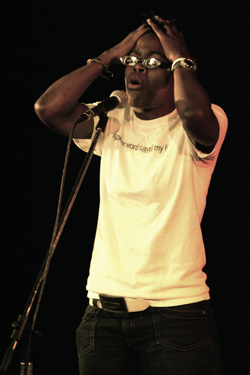 After a toughly fought first round, celebrated Canadian poet Shane Koyczan came out to entertain the crowd with poems about love, politics, family, and bad spelling. He had the crowd crying, laughing, and cheering all at once — if you weren't a Shane Koyczan fan before Saturday night, you surely were clamoring to purchase his CDs before the night was through.

As the second round came around, the eight competing poets — Jill Binder, Truth Is..., Arianna Pozzuoli, Gypsy Eyes, Amanda Hiebert, The White Noise Machine, Krystle Mullin, and Valentino Assenza — brought their best stuff to the floor, performing poems about angry coworkers, mind-erasing government experiments, drunken Cheeto-stealing, bike-hating cops and more. When the dust had settled, the top four poets that emerged were Arianna, Krystle, Truth Is..., and the White Noise Machine, with Amanda acting as the backup.

Arianna, Truth Is..., Krystle, The White Noise Machine, and Amanda will join another four individuals who will be representing Toronto at the Canadian Festival of Spoken Word in Halifax this October. The other team of talented artists include Dwayne Morgan, Tomy Bewick, Boonaa, and Leviathan, all of whom qualified for the team through the popular and extraordinary Up From the Roots slam circuit that also happens regularly in Toronto. The two teams, while competing against each other as well as the other teams from across the country, will be representing our city as they battle for spoken word supremacy in Canada.

Last year, Toronto had an excellent showing, finishing 2nd (UFTR team) and 3rd (TPS team) respectively among a field of extremely talented poets from across the country that had gathered in our city for the festival. This year, both Toronto teams are working hard to better their past successes, and in August and September, I'll be talking to the members from each team about their strategies and their plans for Halifax and posting those interviews up here on blogTO.

The amazing photographs you've seen on this post were taken by blogTO contributor Roger Cullman, who has a whole set of stunning shots from the slam over on his Flickr set, all of which you can see in the slideshow below.

For those of you that can make it out to Halifax in October for the Canadian Festival of Spoken Word, drop me a line: I'll be there, tracking the status of both our Toronto teams and reporting back here on blogTO. For those of you who are still looking for some amazing spoken word and slam in the city, check out the blogTO event listings or the listings over at TorontoPoetrySlam.com.