I didn't know this week was the Toronto Festival of Storytelling until I went to the Toronto Poetry Slam â themed this month as a "story slam" â this past weekend, where I had the opportunity to meet several members of Toronto's vibrant storytelling community. At the slam, I also had the chance to meet Lisa Pijuan-Nomura and Ann McDougall, co-curators of a new monthly storytelling series in the city called SPEAK.

Taking place on the first Monday of every month at It's Not A Deli on Queen West, SPEAK features three storytellers of contrasting styles every month, and also includes an open story jam where audience members are welcome and encouraged to share their stories.

I decided to ask Lisa and Ann a few questions so that newcomers to the scene (like me) could learn a bit more about storytelling in Toronto. 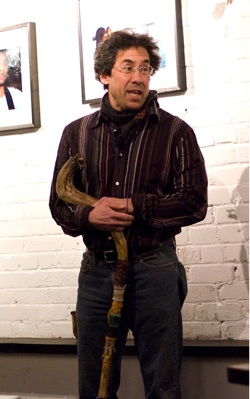 For the uninitiated, what is verbal and visual storytelling?

ANN: Visual and Verbal storytelling means that we bring together artists who tell stories in different disciplines and mediums. The key here is work with a narrative element - which can occur in almost any art form. SPEAK has featured 'traditional', language-based storytellers alongside puppeteers, theatre artist, comedians, historic interpreters, musicians, dancers and performance artists. In addition, every SPEAK incorporates a Story Jam, a period when the floor is opened to the audience to share there stories. We do this to emphasize that storytelling is a universal medium, available to artists and non-artists alike, accessible by anyone at any time. And it's fun!

LISA: As artists who work in a number of different disciplines we were interested in working with story in a broader sense of simply words. We wanted to include a diverse mix of storytellers that pushed some of the boundaries of storytelling and create stories of words, images, sounds and movements. This way, we could create a new sense of story in the community.

Why was it important to start a series like SPEAK, and how does it fit into the larger storytelling community in the city?

LISA: My mentor Dan Yashinsky, who is the founder of the Storytelling Festival in Toronto came to me and asked where the Next Generation of Storytellers were? As the curator of RED, a multidisciplinary event, i felt that i indeed did know where the next generation of storytellers were. But they sounded different from the more traditional tellers who tell folktales and fairy tales. It's interesting to see that in French Speaking Canadian Communities, there is a huge revival in storyteller amongst some of the younger tellers and it isn't rare to go to events where the rooms are packed to hear some new edgy storytellers. That is what i am interested in having happen here in Toronto! We have a brilliant world of tellers who don't necessarily think of themselves as such! I went to Ann and Noah and posed the question to them and they were very interested in being my co-curators/partners in crime in this new storytelling series! We are an interesting mix coming from different backgrounds. Ann is a storyteller and a historical interpreter and much of her work is about true Canadian History, Noah is a puppeteer and a community arts practitioner, and i come from the world of Theatre and Dance...and so, as you can tell, we are a pretty mixed up bunch!

ANN: Toronto is really lucky to have a large and well-established storytelling community, who run wonderful events like the Toronto Festival of Storytelling and 1001 Nights of Storytelling. However, storytelling is still a fairly unknown medium, especially among younger artists. SPEAK aims to strenghten existing connections between storytelling and other artistic disciplines, and to forge new ones. It's also an opportunity to introduce storytelling to new audiences who will hopefully be inspired to further explore the storytelling world.

What can a first-timer expect to see and experience this Monday at SPEAK?

ANN: Monday, April 2nd is going to be a great session for first-timers! The evening will feature Mike Serafin, a senior historic interpreter from Discovery Harbour and St. Marie Among the Hurons in Penetanguishene, Paul Hutcheson, a comic actor who will be performing excerpts from his autobiographical one-man show On Second Thought..., and Elizabeth Stevens, a photographer and performance artist who will be recounting her time in Africa in words and projections. After the featured tellers have performed and a short break, we open the floor to the audience for a short Story Jam, a time in which anyone can come forward and share a story. The jam is always, fun, welcoming and full of surprises!

LISA: Not to mention some great art on the walls of the gallery at It's Not a Deli and some yummy sandwiches.