Two pieces of news from the ROM this week. The first is they've just launched their latest exhibit, Ancient Peru Unearthed. I checked it out earlier this weekend. It has over a hundred different artifacts such as gold masks and jewellery that were dug up from an undisturbed tomb belonging to a little known civilization called the Sicans. These guys pre-dated the Inca and were primarly known as master crafstmen of all things metal and gold.

The exhibit is pretty extensive with the masks such as the one above being perhaps the highlight. Almost as good as the exhibit is all the digital candy the ROM has uploaded to their web site including a recording of the remarks made at the media preview and a link to a web site that has tons of photos and background information. 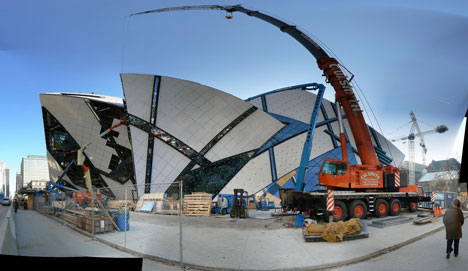 The other piece of news this week is that the ROM announced the Michael Lee-Chin Crystal will be unveiled and open to the public for 10 days starting June 2nd. Word is that part of Bloor Street will be closed on the 2nd for a big 24 hour party with live music and free all-night tours of the ROM's new digs. There won't be an actual exhibit on during this period as the point is to allow everyone to see the space in a completely empty state for perhaps the only time in its history.

Photo of ROM Crystal by Gavatron from the blogTO Flickr Pool. Photo of Sican mask by me.