Dead people just want attention, laying around wondering what everyone on the surface is up to. Are they talking about me? Do they miss me? Do I look okay? This last question seems ridiculous from a person alone in a pine box, but in this case, its not.

Monochrom, an art/philosophy/technology collective from Austria, were burying people alive last night in Mississauga. Visitors to UofT's Blackwood gallery were given the chance to climb into a coffin and be buried under more than a foot of dirt for up to 15 minutes.

A camera mounted inside the coffin gave everyone a night vision peak at their pals underground. Being filmed makes death feel even more like a scene and some people play it up.

One woman, upon her resurrection, gushed that while inside the coffin, she had been transported back through time and space to a moment in Vienna when she had sworn upon an Egyptian sarcophagus to leave her failed marriage, which she later did. Upon this recollection, she said she had felt herself tugged 100 ft. downwards - but not in a bad way.

"I guess I'm one of those people who just feel things", she said excitedly. 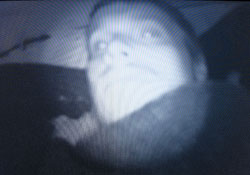 Most people tried to play it cool - myself included. When it was my turn, I didn't look directly at the camera, but furrowed my eyebrows and smirked to myself. I'm sure it looked pretty good on the monitor. Once inside, I could hear the people above fairly well. This must be why they bury coffins six feet deep, so as not to give the dead the satisfaction of eavesdropping.

Conversation at my faux funeral was mostly in Austrian, so I couldn't understand a word of it. Were they making wisecracks? Do Austrians like being mistaken for Germans? Is it like being a Korean mistaken for Chinese? And just like that it was over. They opened up the lid and snapped a Polaroid of me, as if sensing my need for attention. A woman in black then presented me with a white chrysanthemum and a certificate - now I really felt special. After that its all "get moving, there are other people in line here." You're never as special as when you're dead.