It's not every day that I find a web comic that isn't either totally crass and/or video game related that I enjoy. It also isn't every day that a single creator can have multiple comics not falling into either of those categories and still keep my attention. Debbie Ridpath Ohi, a writer / illustrator / entrepreneur / mishmash has managed to accomplish the unthinkable with me. I had the chance to have an email sit-down with the short creator to ask her a few questions on what makes the original Inkygirl tick.

A warning: she may be small, but she's got enough work under her belt to make most people's heads spin.

--
BlogTO - There's a chance that the people reading this won't know "who" Debbie Ridpath Ohi is. Who is she?

Debbie Ridpath Ohi - I'm a freelance writer and illustrator living in Toronto with my husband, Jeff. No pets, no kids. I've written a nonfiction book (The Writer's Online Marketplace, published by Writer's Digest Books), magazine articles (print and online), poetry, and short stories. I've lived in Toronto for over 20 years; I LOVE this city.

I'm also a hobby songwriter and musician; my music group, Urban Tapestry, has a couple of CDs out, and we've performed in the U.S., Germany, England and Canada. We just just finished a gig in Atlanta and now I'm hooked on grits. Our songs have aired on various radio stations, including CBC and Dr. Demento.

I worked as a systems programmer/analyst for Toronto-Dominion Bank for two years before jumping off the corporate cliff into freelancing. I used to have a popular Web site for writers called Inkspot which I ended up selling to a company in the U.S. that shut it down soon after (see the summary of my corporate experience here). I have an unhealthy obsession for office supplies and compartmentalized food. I update my personal blog, Blatherings, pretty much daily, where I also post my cartoons, illustrations and photos.

I have way too many online projects.

Hey, and can I mention my famous sister? Her name's Ruth Ohi, and she's written and/or illustrated over 40 picture books and novels. She's been nominated for the Blue Spruce Award this year. 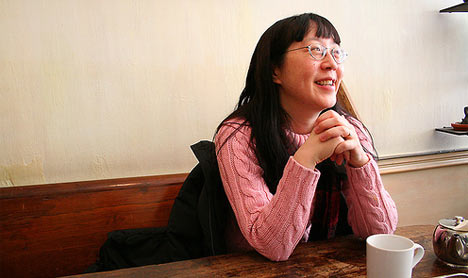 BTO - How long have you been drawing for and what was it that got you started?

DRO - I've been drawing every since I can remember. I used to get in trouble for drawing on furniture with crayons back in my rebellious pre-school days. I haven't had any formal education in art, sadly, and am pretty much self-taught. I only started taking my illustrating more seriously a few years ago when someone offered to pay me for a cartoon. I was shocked but also thought hey, why not? Writing is my main passion; I never thought anyone would want to pay me to draw as well. Anyway, I started drawing much more, working on improving my craft. I'm nothing compared to my sister, but I'm gradually getting better. Most of my clients find me online, through the cartoons and illustrations I post on my Flickr site or in my journal.

BTO - What was your first foray into the web-comic kingdom, and what became of said creation?

DRO - My first comic strip was Waiting For Frodo, which was about an overly avid Lord of the Rings fan waiting in line for the movies. I had only planned to continue it until the first movie came out, but it got so popular that I decided to stick with it until the third movie. The strip even had fans at Weta Digital in New Zealand, the company that did special effects for the movie! They sent me an Eye Of Sauron Weta crew t-shirt, which was pretty cool. I ended the strip when the third movie came out, since there was no reason for the characters to be waiting in line for anymore.

BTO - One thing I noticed about your comics have been their varied illustration styles and layouts. A lot of web comic artists find their thing and stick to it, so why all the variation?

DRO - I like experimenting with different styles because it's still a learning experience for me, plus I'd get bored if I used the same style for all my comics. Once I feel I've learned enough, however, I'll pick one style and stick with it... I'll probably start a new strip at that point.

BTO - I saw something about a quick novel writing competition that one of your comics chronicled. What was that all about and how did you do? Judging from the comic, not so well, but I suspect otherwise...

DRO - NaNoWriMo is National Novel Writing Month, a fun (or tortuous, depending on your viewpoint) challenge to write a novel in one month. I didn't participate last year, but did contribute NaNoWriMo-themed comics every day as well as following the theme in my Will Write For Chocolate strip. I wrote a NaNoWriMo novel for young people several years ago; I finally revised it last year and submitted it through my agent; it's gotten some interest from a publisher in the U.S. -- wish me luck!

BTO - Inkygirl isn't only a webcomic. Aside from the cute slice of life comic, what other reasons might someone peruse Inkygirl?

DRO - For information of interest to writers, interviews with writers, writing job resources, writing-related resources and blogs, and reviews of writing-related books. I also have links to my other cartoons and projects, including my daily publishing news column for Writersmarket.com (part of Writer's Digest).

BTO - What are some of your bigger influences, illustration or otherwise?

DRO - Hoo boy, let me think. Since you asked "what" instead of "who," I'm assuming you mean both. Off the top of my head:

My MUSICAL INFLUENCES: I only started songwriting and performing with Urban Tapestry when I discovered the filk community. For more info about filk, see Filking.net, a site that I created to provide information for and about filkers. As for current musical influences, here are a few: Ookla The Mok (some great rock music for nerds!), Barenaked Ladies, Tilly and the Wall, Moxy Fruvous, Jonathan Coulton and (of course) chocolate.

I'm missing a ton of names and groups, of course, but this gives you an idea.

BTO - Chocolate isn't too musical, generally speaking... What are your illustrative and writing goals for the next 10 years, no matter how pie-in-the-sky?

DRO - My writing goals: To have a hefty number of books for young people published.

My illustration goals: To have an online strip generate enough income to justify the amount of time I spent on doing online comics. I'd also like to publish a compilation of some of my strips in print format someday.
--

Debbie obviously has a lot to say, which is not only evident in her answers, but in the amount of work she churns out as well. Currently, her main focus is Will Write for Chocolate, though that could change at any moment, if I'm not mistaken. Her work is light-hearted and a good quick dose of fun, and I can easily recommend adding her work to the list of comics you peruse every day while the boss isn't looking. Thanks again Debbie!

Photo of Debbie by Ray VanKleef. Click here for The previous edition of Web Comic TO, featuring Scott of VGCats.com Next time I'll be talking to a green dinosaur...