The IFOA ended with a reading from the Giller Prize finalists, briefly preceeded by the presentation of the Harbourfront Festival Prize (to Dionne Brand).

I hoped the reading would clarify where these seemingly random nominees came from, and validate the small press hurrah. There is also, of course, the presense of two translated titles and two collections of stoies.

Well, I'd heard Rawi Hage at the GG reading and was duly affected by the swaggering machismo of his characters and the bleak war-torn background (the novel takes place during the Lebanese war). And I was again.

Hage's reading emphasizes the short, terse carelessness of his characters. He read from one section where the lead character is talking to his girlfriend, who complains about the lack of anything beyond the physical aspect of their relationship. After sex, the girlfriend says "you lay on your back and smoke and hardly say a word. You're breakin' me."

Vincent Lam was surprisingly funny. I'd heard that the stories were bleak - the connected stories surround four med students in a hospital. Lam's reading emphasized the necessary dry wit and blase attitude of one doctor in the face of the overnight shift - joking with the nurses, forgetting the name of the guy who died, making it not matter.

Lam, incidentally, is the flag bearer for the bigger publishing houses. 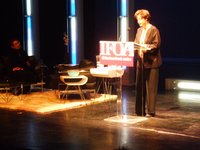 The Francophone authors read next, cleverly paired with their translators - the author would read a section en franĂ§ais, and the translator would read the same section in English. It was really interesting to hear the difference in style between the readers.

Pascale Quivier read first from Perfect Circle - a section at once ridiculous and sad, introducing the indomitable mother of the lead character's love interest.

Her translator, Susan Fishman's reading was not as confident initially, though the humour on the page soon relaxed her. Her translation is faithful, obviously, to the tone and meaning, without the stilted total literalism that affects many.

GaĂŠ tan Soucy and his translator read, I was amused to note, in a surprisingly similar way. Their reading focused on a section in the book where a father, who is bedridden (paraplegic, I think), is visited by a crazy alocholic widow who's essentially a cheap nurse.

Both Soucy and translator Lederhandler read with the verve of parents telling their children stories - the dramatic pauses, the voices (Lederhandler in particular did an amusing falsetto for the nurse) - which, as I found with most readings, drew out a humour that reads more subtley than it sounds.

Carol Windley read last from her collection of stories. She chose a section from Sand and Frost about a student named Lydia who comes home early from school because she is deeply unhappy and suspects this has to do with an tragic event in her family's history.

Windley, whose puff of white curly hair and narrow frame remind me of a librarian I had in grade two. Her reading style is similar, her voice is high, quiet though on a mike, and she ennuciates very clearly. I was less pulled in to her stories than the others, but then I was tired, and it's hard to go last.

So, what to make of the Giller noms? The authors are unsuprisingly able, their subject matter quite varied, though there does seem to be something of a dark shadow on all their work. If I wanted to be melodramatic I might say the spectre of death (Quivier's is the exception, though a lesser sense of loss is certainly present).

I suppose the ultimate measure would be, am I going to run out and read these books? I will probably pick up Perfect Circle which had caught my eye before I heard about the nominees. I am personally disinclined to read about war - although I am trying to gear myself up for Cormac McCarthy's The Road - maybe I should read De Niro's Game as a warm up.

Bloodletting and Miraculous Cures I might leaf through to see if I capture the same humour I heard in the reading. Home Schooling will probably get the same, though more to see if I connect to the voice on the page. Immaculate Conception